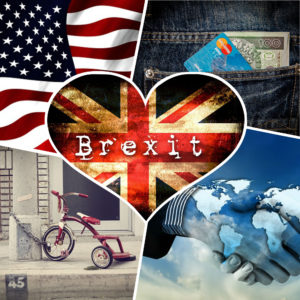 The US President-elect praised Britain for voting to leave the European Union, saying: “People, countries, want their own identity, and the UK wanted its own identity.”

This changes the political landscape completely as for a number of months since holding the referendum David Davis (the secretary of state for exiting the EU) has been accused of appearing before parliament without any details of how the government is planning to embark on Brexit negotiations. Davis chirped Britain could be a “beacon for free trade across the world” and a “more glorious country” with an immigration system that controlled the numbers.

He suggested Britain could bring in an even more rigorous immigration system than a points-based system. Twenty-six weeks after the referendum and the prime minister has only just issued the first definite blueprint of how Brexit talks will pan out.

It all seems clearer now. Before this announcement there was no evidence of sound planning by the government, little or no detail whatsoever on the deal it wants to strike, or the strategy for achieving that deal or the reasons for rushing it through parliament. Cynics thought the bravado for a hard Brexit pouring out of the euro skeptics team in the Tory party was all smoke, spin and mirrors. The British media reported former shadow home secretary Yvette Cooper who criticized the government and dismissed Davis’s words as an “astonishingly empty statement” with “no plan, no sense of grip, no detail”.

Now the prime minister (a tough politician and a daughter of a pastor) has flagged clearly that her objective was a clean break with the UK’s biggest trading partner.  This week she was quoted to exclaim “often people talk in terms as if somehow we are leaving the EU, but we still want to keep bits of membership of the EU”.

Triumphantly mimicking Elizabeth – the warrior Tudor queen who steely withstood the invasion of England by the mighty Spanish Armada – Theresa besought the words “We are leaving… we are coming out.”  In simple terms, her roadmap appears to cover important tasks, namely to leave the customs union alternatively work hard to secure free trade deals across the world.

She wants to regain full control of UK borders, including migration even if that means ending single market membership. Lastly, she wants to break loose from the chains binding Britain with rulings oozing out of the European Court of Justice.  Meanwhile, north of the border, the leader of Scotland’s government, Nicola Sturgeon, repeated her pledge to hold a referendum on Scottish independence if the UK leaves Europe’s single market as a consequence of Brexit.

It is relevant to point out that in the June referendum it was the Scots who voted by a clear margin in favour of remaining in the EU. Another bolt from the blue for was the sudden departure of Sir Ivan Rogers, presenting a dramatic twist ahead of the start of Brexit negotiations. He is a gifted statesman who has served as Britain’s ambassador to the EU since 2013, but was visibly frustrated by the government’s approach to exit talks.

Many agree that he does not suffer fools gladly and observers argue that the current UK government seems intent on centralizing power and definitely such a policy did not match his temperament. In his resignation letter, he carefully puts the word Brexit in quotation marks, preferring to use the word exit about the UK’s future.  One notes how he never used the term ‘triggering ‘Article 50’ but instead coined the word “invoking”.

Realistically it seems very likely that a hard Brexit may be invoked since the EU would not grant the UK access to its capital markets without the former honouring all four freedoms of the Single Market, including enforcement through the Commission and the European Court of Justice.  Does this mean that No. 10 is really in a weak negotiating position? Certainly, no amount of bluster from the PM or David Davis can change that. It sounds a paradox how Davis writing in The Sunday Times, said the government would be seeking to forge a “strong new partnership” with the remaining 27 member states.

Cynically, he remarked “We don’t want the EU to fail, we want it to prosper politically and economically, and we need to persuade our allies that a strong new partnership with the UK will help the EU to do that”.

Many non-EU banks use London as headquarters to access other European financial markets, especially investment banks from the US and Switzerland and it is common knowledge that the five largest US investment banks, for instance, earn the lion’s share of turnover in the UK. Consequently, once Article 50 is invoked, some clearing and trading activities may be forced to move out of London due to ensuing disadvantages.

The decision of companies based in UK to re-domicile abroad could open opportunities for Malta and Ireland – both English-speaking countries. The recent decision of EasyJet to service all its 250 jets in Malta could be the harbinger of other British companies who may be attracted to move here. Britain as an EU country promoted itself as the Gateway to Europe for many international companies such as Nissan and Honda. Now that there is an uncertainty about whether or not Britain will have access to the single market there may be some tough boardroom decisions to be taken.

Telecom companies such as Vodafone are considering whether to relocate headquarters into other parts of Europe where they enjoy preferential tariffs. It goes without saying that the UK is a prime contributor to the EU common pot which in the future will have to be replaced or else the budget for 2017/8 will need some trimming.

Latest news show how Lloyds is considering opening a subsidiary in Malta, which could take the form of a protected cell company. This kind of structure has already proved to be very attractive for insurance companies. In conclusion, it seems that Trump, the president-elect has taken a fancy to the British prime minister and unless he changes his mind, he intends to help her forge a new trade deal. In his words, “Britain and America will get a new trade deal – done quickly and done properly”.  Furthermore, he promised to help make Brexit great.

But all this freedom comes at a price as the pound is set to tumble deeper in value, given the negative way the markets react to Brexit. These are exciting yet decisive times with pundits saying Britain wants to keep its options open. Will this myopic fear of migration lead to a ‘clean’ Brexit – meaning London jettisons both the customs union and the single market. Theresa May has consciously opened Pandora’s box.