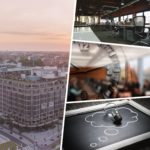 PKF had the pleasure and privilege to visit the CIC Thought Leadership centre in Rotterdam, The Netherlands. The Centre in Rotterdam is the home of about 550 innovative companies and is built to synergise with CIC’s international community of entrepreneurs, investors, and established businesses. CIC based in Boston US has recently expanded to Rotterdam.

This city was chosen as an ideal location after conducting empirical studies which earned it bonus points as a city situated in a very central location just one hour flight south of Amsterdam, a “footstep” away from the Belgium border and really close to other European hubs.

Like Malta, the Dutch are fluent in English and their country prides itself on being a melting pot of different cultures. The visit to Rotterdam commenced this week and is a sequel to an event supported by FinanceMalta hosted at the Microsoft Innovation Centre, Skyparks Gudja.

The event styled “Blueprint for Innovation” saw an expert lineup of speakers. These included (among others), Gor Sargsyan MD, Qbiticlogic International Atlanta USA, Stas Gayshan MD, CIC Boston, Joe Woods MD, Creolabs, Ing Joe Sammut CEO, LifeSciences Park, speakers from MCAST and University while the Silvio Schembri, parliamentary secretary responsible for innovation gave the opening speech. Comments at the event were positive and all agreed that the island needs to do more to boost its contribution to R&D which, based as a percentage of GDP, is one of the lowest in the EU, and in this context, the government in its 2018 budget is pledging to open the taps for more investment.

The good news is that last year both political parties promised in their election manifesto to increase investment in Innovation and consequently PKF thinks that its efforts to attract a world class organisation in this field does not come a moment too soon. Alas the objective of having an innovation and business accelerator centre of caliber will prove to be a true catalyst to anchor existing manufacturing community and attract new ones.

This roadmap is an ambitious one as European governments are in competition to attract international companies and start-ups particularly in pharma, fintech and blockchain technologies. Which brings us as to why PKF is keen to put its shoulder to the wheel and attract investment in this regard.  Two years ago, it pioneered a familiarisation trip which visited Massachusetts Institute of Technology (MIT) in Boston, USA to explore links to promote Malta as a potential business accelerator and/or Life Sciences hub for innovators, inventors and entrepreneurs.

Such a visit was undertaken with the blessing and patronage of Chris Cardona, the minister responsible for the economy and start-ups.  He offered the services of a technical representative from Malta Enterprise based in New York to join in the discussions – although each party catered for its own expenses. It is interesting to note that the Massachusetts Institute of Technology (MIT) is a private research university in Cambridge, Massachusetts founded in 1861 – built in response to the increasing industrialisation of the United States.

The uniqueness of MIT is in its appetite for problem solving – especially those intractable technical problems whose solutions make a tangible difference. Needless to say, that with its supportive campus environment it houses an incredible number of talented students and as part of its diversity and its intensely creative atmosphere, both the arts and science flourish in all their forms. It is no stranger to accolades – rated as the world’s best university in chemistry; economics; linguistics; materials sciences; nanotechnology and astronomy.

It goes without saying that this impressive learning institution is the pride of the American intelligentsia and other advanced countries (such as Singapore) have regularly invested in its development since the sixties to partake in its overflowing chalice of innovation and cutting-edge research. Another interesting landmark was the Boston-based Cambridge Innovation Centre (CIC). This houses more than 1,000 companies in an impressive building sporting 50,000 square metres of premium office and co-working space across eight facilities.  Another six centres are located in St Louis, Missouri, Miami, The Netherlands, Poland and Australia.

A number of high-profile companies know their origins at CIC – including HubSpot, which now employs over 1,100 people, and raised $125 million through its IPO last year, and Greatpoint Energy, which several years ago announced a $1.25 billion deal to build reactors in China.  Additionally, Android co-founder Rich Miner built his unique Google Android software. Rich established Google’s New England headquarters there.  CIC also has a non-profit sister, the Venture Cafe Foundation (this provides a Forum for venture capitalists to scout and help fund new talent).

Having toured CIC in Boston US, the PKF delegation were guests at the Venture Cafe – an organisation which funds promising talent. CIC offers a number of user options and caters for different applicant types starting from single user, or a founder with some employees or a company with 200 people.  Back to Malta, one can rejoice that a future Centre of Excellence is reinforced by talent from Barts Medical school, AUM, MCAST, University and other colleges become the birthplace of a nexus of superior minds in the Med.

This is not a pipe dream but a practical solution which with some imagination and suave political foresight be engineered to house a cohort of talented graduates operating in a congenial atmosphere supported by venture capital. Government in its last budget had allocated over €75 million to build a new campus in Smart City and this may be an ideal venue to host an innovation centre. Only thus can we attract international business to exploit top-end R&D and with the support of government the private sector is encouraged to attract talent – a particularly shy bird.

It is not an easy journey and many countries including Saudi Arabia want to emulate the commercial success of Boston, New York and Silicon Valley. Even China is investing in the Pearl River Delta town of Shenzhen to emulate the success of Silicon Valley. Can our country, albeit small and lacking indigenous raw materials rise to the occasion and surf gloriously over the tide to seize this opportunity? No doubt this ecosystem will help unite the collective faculties of our universities, technical institutes, academies and medical schools to pursue cutting – edge research particularly in science subjects such as Oncology, Nanotechnology and bioscience subjects.

Boldly embarking on this ambitious roadmap will shine a light to guide us along a shadowy tunnel at the end of which we can underpin superior GDP growth and improve our competitiveness level.