3rd August, US President Barack Obama held a press conference and announced the final form of America`s Clean Power Plan. “The single most important step America has ever taken to fight against the climate change.” This plan was created to find a solution about how should America step against the climate change. The main reason of the change is the always rising carbon emission, which is harmful not only for future, but for the recent society as well. Environmental Protection Agency (EPA) started to work out the plan for this issue two years ago and now they have results and ideas about the solution. According to the Plan, every state have to build out how they can reduce their Power Station`s carbon emission. Then they should reach significant, 32% reduction. 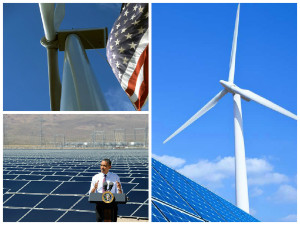 Mr. Obama spoke about climate change like the most important challenge recently, because human activities changed the climate in dangeruous way. “I am convinced that no challenge posed to a greater threat to our future and future generations than a changing climate.” Nowadays the United States is the world second largest greenhouse gas emitter after China. American power stations account for about a third of US emissions of CO2.

What else, he was talking about? About disasters, which have become much more dangerous than ever in the past few decades. We can feel the climate change, mankind suffer from it. We have seen stronger storms, floods, icecap schrinks. And as Mr. Obama said, asthma rates has been doubled in America in the past few years. According to several surveys 2014 was the planet warmest year on record. The average surface temperature increased rapidly in the past century on Earth and experts expected faster rise for the next years.

Now firstly America have to take steps and pave the way for new regulations, cut the pollution. Right now power plants are the source of 3rd america`s carbon pollution, thats more pollution than which cars, airplaines and homes generate combined. No wonder, because the low prices of natural gas is low in the US, so they can open a lot of gas-fired power plants.

Obama highlighted that people have to make changes and have to do more effort for reducing emission. The last 6 years America has already taken steps against climate change, used less “dirty energy”, more clean energy, they doubled their investment in renewable energy. United States generated three times as much wind power, two times as much solar power. Now the President want to reach a significant 32% reduction to protect people health, the country`s security and economy.

“Our climate is changing. We can see it, we can feel it.”

According to the plan the next few years each state will have the chance to put together it`s own plan to reduce the measures. Because every state has a different sources and utilization from economical sources. States was got the time to cut pollution. Whole America is working on the solution so now states have to meet the target.

They have higher expectations about the plan; it could reduce the number of the people who are suffering from asthma. They expect fewer premature death, fewer heart attacks, fewer hospital admission, fewer missed school and work days.

Some criticize Clean Power Plan, because they afraid of huge lay-offs in the energy industry. Mr. Obama said that because of the always expanding renewable energy industry new workplaces will open. In the past few years renewable energy sector will have a need for more and more workforces. Others say it will cost a lot of money, but actually americans can save more with its help. It will has an effect for households, because they will pay less on their energy bills with $85 a year. Moreover the use of reneweble energy giving consumers wider choice as ever before. Companies are inventing new technologies, hybrid or fuel efficient cars.

Mr Obama highlighted, it is a worldwide issue, a problem, what the world have to solve together. He said that times is not on our side and we can speak about “too late”.

“No single action, no single country will change the warming of the planet on its own.”

America has a chance to put in place one of the most ambitious international climate agreement in the human history. This initiative made the EU to take part in conferences and the solution program. UN summit scheduled from 30 November till 11 December in Paris, where the world leaders will meet to discuss which steps should they take to limit global temperature inceases to two degrees Celsius. America and Europe have already have an agreement in connection with air pollution, called Long Range Transboundary Air Pollution, which came into force in 1979. It was the first initiative which recognized both the environmental and human health problems, caused by the flow of the air pollution and it was the first, which try to solved it in regional way. This agreement concentrate mainly of the emission reduction strategies on regional air pollution.

When we speak about the EU, we should mention that EU is the third biggest air polluter in the world. Because of this ranking, it always try to support its member countries environment friendly initiatives. There are numerous institutions in the EU, which dealing with environmental Protection. The main information source is the European Environmental Agency (EEA), which provides sound, independent informations on the environment.

All in all climate change is not only USA`s problem, global warming has a huge effect in the world. Clean Power Plan said to be a solution to foster global goodwill and spur countries to pin-down a climate rescue pact by year-end.

Although experts say that it is far from the real solution. When every nation would meet the targets and reduce emissions (which is not likely to happen), the average surface temperature could be around 3-4 Degrees celsius.

In my opinion environment has in a bad situation, because it can`t protect itself, so we are responsible to pay attention to its changes. Clean Power Plan could be the first step towards a better future. Mr Obama said: “We only get one home, we only get one planet. There`s no plan B”. All in all we have the opportunity to change our attitude to the environment, use public tranport instead of using cars, support environment friendly initiatives.