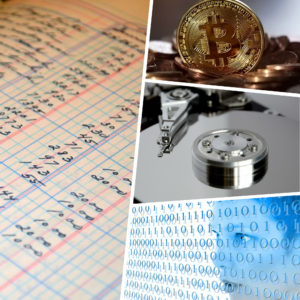 These days we read and hear a lot about blockchain not in the context of basic engineering terms, where such a type of mechanism is a valuable tool for lifting heavy objects with minimum stress, but in financial circles where it constitutes the distributed ledger technology behind any virtual currency such as Bitcoin.

By definition a blockchain is resistant to modification of the data as once data is recorded in a block it cannot be altered retroactively. Blockchains can be described as an open, distributed ledger that can record transactions between two parties efficiently and in a verifiable and secure manner.

Let’s take a look at the major advantages that use of a blockchain can bring to the financial sector and also discuss some of the risks associated with it.  Blockchain may offer many benefits and it seems likely to be a technology that is here to stay.  As it moves into the mainstream, it will be important to actively manage the risks that arise from its use. It is possible to register on a blockchain different kinds of activities as for example the settlement of financial transactions.  All those activities can be monitored in real time by market participants, increasing in this way its unique transparency.

A public blockchain thus benefits from the symmetry of information since it goes without saying that both transparency and symmetric information are key features in a free market economy. The financial services industry is being tested by the Big Four audit firms as they are exploring the uses of blockchain technology for cryptocurrency transactions. In fact, as stated earlier, Bitcoin as a virtual currency uses blockchain as its underlying technology.

Bitcoin can be best described as a cryptocurrency and a payment system invented by a programmer, or group of programmers, under the name of Satoshi Nakamoto.  The first recorded blockchain in 2008 was the brain child of Satoshi Nakamoto, which served as a core component of the ubiquitous bitcoin, where its transactions are recorded in the public ledger.

Simply put it is an encrypted, distributed database shared across multiple computers or nodes that are part of a community or system. Blockchain can best be described as the technology that enables cryptocurrencies to trade and is built on the principles drawn from cryptography, game theory and peer-to-peer networking. What makes it one of the most exciting technologies is its ability to reduce the possibility of security breaches by even its own operators.

In a traditional implementation, a rogue administrator can potentially change historical transactions because of access levels to the data. However, with a blockchain implementation this is better controlled since one would need the collusion of a large number of teams working together across data centres to modify historical data, which greatly reduces the possibility of data tampering.

Beyond its use in the financial sector, we meet other uses such as in the media and telecommunication industries. Media sector applications include supporting low-cost micro-transactions that can be processed cheaply without the fees that existing payment networks require. To start with, a blockchain ledger in telecommunications may be a reliable and secure way and in the process the digital block’s programmability makes it possible to enforce usage rights.

It can for instance, secure intellectual property and creative digital products like music and images. This was the case when both IBM and Samsung have offered a proof-of-concept built partly using Ethereum, a blockchain-base framework, to demonstrate how it can support novel Internet of Things (IoT) applications by supporting transaction processing devices.

Other applications are more futuristic. One can mention DocuSign, which provides efficient digital transaction management and electronic signature technology, developed as an app for Visa cardholders, which is designed to simplify purchasing of autos and/or leasing. Moving on to its use in travel and hospitality, one finds how a shared distributed ledger can simplify the settlement process. Blockchain technology can support loyalty points programmes that include a more advantageous accounting of liabilities.

In healthcare and life sciences, cryptographic security can enhance records security while the nature of high volume of transactions can make claims processing more efficient. Clearly, blockchain has the potential in the near future to exacerbate secure data exchange in a growing list of other industries. It has the ability to make data transfer simpler and easier between entities. In hospitals, health records could make it easier for patients to share records with numerous providers while keeping discreet control of the records. In addition, a community of users, including hospitals, doctors, patients, and insurance companies, could be part of the overall blockchain system, thereby reducing fraud in healthcare payments.

This technology can be used to create a permanent, public, transparent ledger system for compiling data on sales, storing rights data by authenticating copyright registration and payments to content providers. It can be very effective in the public sector where it can improve record keeping. Other public sector uses include vehicle registries, digital identities for individuals, voting records and paying of benefit entitlements.

Typical uses extend to IT Cyber security when cryptographic signing using blockchain can enable immediate detection of data manipulation and verifying IT system integrity, giving it a crucial role in cyber security, where different transactions need third party arbitration to validate. This is essential in order to generate trust among the economic agents so undoubtedly by using a blockchain there is no need for third parties to intervene because transactions can be validated almost in real time on the blockchain.

Certainly, it reduces significantly the settlement time and saves costs involved in verifying transactions by removing the need for trusted “third-parties” such as banks to complete transactions, the technology also lowers the cost of networking, therefore allowing multiple real time applications.  In conclusion, use of blockchain promises to bring significant cost efficiencies to global supply chains, financial transactions, asset ledgers and has uses in social, health and public sectors.

However, not everyone is convinced of its effectiveness and quoting Steve Wilson, of Constellation Research, he believes the technology has been hyped with unrealistic claims. Only time will tell if blockchains will succeed to revolutionize our lifestyles and combat the manic over reach of unnecessary bureaucracy in various sectors.