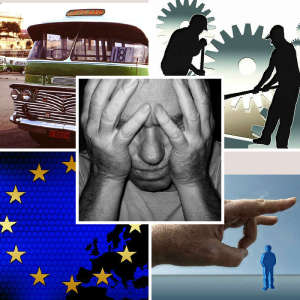 Unemployment as well as GDP figures have undoubtedly been given utmost importance and in fact governments launch various initiatives aimed at keeping the unemployment rate stable and at increasing the GDP . In the recent past¸ unemployment rates were of huge concern in European countries. The relentless rise in unemployment¸ particularly youth unemployment¸ was one of the most dramatic consequences of the crisis in the euro area. In fact¸ there were countries such as Spain where a quarter of the youths couldn’t find a job after completing their studies. To this extent¸ measures to tackle unemployment nowadays feature on the agenda of all European countries.

When it comes to the Maltese economy¸ how will the relation between the Maltese GDP and unemployment figures be reflected? One of the well-known observed relationships which is used to relate Gross Domestic Product (GDP ) and the unemployment rate is the application of Okun’s Law. According to the principle established by this law¸ there is a corresponding two percent increase in employment for every established one percent increase in GDP .

The reasoning behind this law is quite simple. It states that GDP levels are driven by the principles of demand and supply¸ and as such¸ an increase in demand leads to an increase in GDP . Such an increase in demand must be accompanied by a corresponding increase in productivity and employment to keep up with the demand. However this rule may not exactly apply when it comes to modelling the Maltese economy. Indeed¸ from a working paper published recently by the Ministry for Finance¸ which modelled the relation between the GDP and unemployment in Malta using a data period between 1993 and 2012¸ it was estimated that a 1% increase in the country’s Gross Domestic Product has a contribution of a 0.1% decrease in the unemployment rate¸ which contributes to roughly a 180 increase in jobs.

This is probably due to various factors related to the labour market as well as wage flexibilities. However, if one were to attribute the most important factors leading to the low Okun coefficient it would be the hoarding of labour during recessionary periods. This hoarding is locally motivated by several factors, including the avoidance of additional costs that would have to be sustained if employers were to hire new workers when demand returns to normal conditions, as well as the tradition of lifetime employment in established family run companies where the employer-employee relationship is so strong that the employer finds it difficult to fire workers. Another factor is the financial support by the Maltese government in order to retain workers during recessionary periods.

From this working paper it was shown that the impact of the manufacturing sector on the unemployment rate is significantly smaller than that caused by the service sector. Thus, it is suggested that the unemployment rate has been more sensitive to developments in the service sector even if one makes an allowance for the unequal size of both sectors. Such a result may run contrary to the general perception that the unemployment rate is more sensitive to developments in the manufacturing sector, probably due to a number of factors, including the more frequent firing observed in this sector. Therefore one may conclude that the challenge the manufacturing sector is currently facing is buttressed by government policies directly targeted to assist companies in this sector in times of economic distress.

While in some countries the 2007/08 crisis had left a very negative effect on the economy, to the extent that unemployment rates had experienced massive growth, other countries seem to have mitigated the effect of the crisis, thus experiencing no significant upward trends in their unemployment figures.

At this stage, we take an opportunity to compare and contrast the performance of the labour market in Malta to three other countries: Cyprus, the Netherlands and Belgium.

With regard to Cyprus, the unemployment rates before the 2009 crisis ranged from 3.3% to 4.4%, which is considered to be among the best in Europe. However, in contrast to Malta, the crisis left a massive impact on Cyprus’s economic performance, resulting in huge increases in the unemployment rates month after month.

Back to Malta, if we were to consider the period 2007-2014 and compare GDP quarterly data with the same period in previous years, the only periods which had experienced a drop in the Maltese GDP were all quarters for 2009 as well as the last quarter of 2011 and the first quarter of 2012. All the remaining quarters during the years 2007-2014 experienced increases in their GDP.

Moreover, 2013 proved to be the year which recorded the most significant shocks in GDP over the previous year, seeing a 5% drop in the first quarter, 5.7% decrease in the third quarter and a 4.9% decrease in the last quarter. As stated previously, before the 2009 crisis Cyprus had been performing relatively well and was among the best performers in Europe. This is certainly reflected in GDP growth prior to the tail-in of its banking structure, where the percentages increases over the previous years ranged from 2.1% to 5.6%.

Compared to Malta, the Netherlands recorded a GDP decrease in all quarters of 2009 when measured against the respective quarters of 2008, the highest decrease being in the second quarter and the lowest in the last quarter. However, in contrast to Malta, while the Maltese GDP has been experiencing increases from the second quarter of 2012 up till the first quarter of 2014 when compared to the previous years, in the Netherlands the GDP has been decreasing in the same quarters and no major increases were recorded between 2010 and 2011, with the percentages increases ranging from 0.3% to only a maximum of 2%.

One may pinpoint the success of the government’s policies to safeguard jobs, due to the fact that labour hoarding has helped in containing the impact of negative developments in the manufacturing sector on the unemployment rate.

When one also considers the limited effectiveness that widespread expansionary fiscal policy would have on aggregate demand, it is easy to see why the government should continue offering such sector-specific firm-targeted financial support in times of economic distress, particularly because the manufacturing sector typically employs persons whose skills are not easily transferable to other sectors of the Maltese economy and would therefore risk becoming long-term unemployed.

Luca Sacco is a Trainee Statistician with PKF Malta