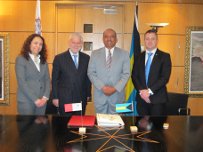 High Commissioner of Malta¸ Joseph Zammit Tabona said this Agreement “is instrumental for bilateral relations to be strengthened” and “demonstrated good practice in the global financial sector.” High Commissioner of The Bahamas¸ Paul Farquharson said that “this level of cooperation…signifies the goodwill that exists between our two countries.” Both signatories confirmed the agreement included all standard means to ensure due process was followed in tax information requests to both countries respectively¸ including¸ for example¸ provisions to protect confidentiality of information. The TIEA will also adhere to public policy considerations and provisions related to protecting legal privilege. Malta and the Commonwealth of the Bahamas are both members of the OECD Global Forum on
Transparency and Exchange of Information.