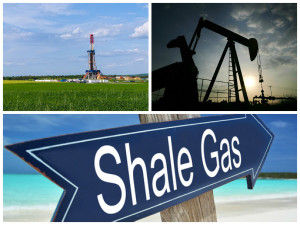 Shale gas refers to natural gas that is trapped within shale formations. Shales are fine-grained sedimentary rocks that can be rich sources of petroleum and natural gas. Combination of horizontal drilling and hydraulic fracturing is used for shale gas mining.

Unfortunately we do not know where exactly is the shale gas. A real map of shale gas does not exist. Shale gas is difficult to quantify until you take it out. The European Union estimates that about 450 trillion cubic meters in the world.

According to Joint Research Centre (JRC) of the EU the shale gas is allocated in this way:

Nowadays the convenience of shale gas is not sure. At the beginning there were many positive expectations. The United States believed in the shale gas revolution. They wanted to reduce the dependence on imported energy. The reasons for its success can be found in the economic and energy benefits that the extraction of shale gas has led until 2014 in Western countries. Today the scenario is changed drastically. There are three main factors hindering the development of shale gas: the drop of oil`s price, environmental risks and the legislation on extraction of shale gas is not clear.

The extraction of shale gas is economically viable only when the barrel of oil exceeds 70 dollars. Whereas the price of gas, almost always, is linked to oil’s price.

Currently the collapse in oil prices (below 50 dollars for a barrel) makes the gas obtained from the crushing of rocks at great depths (between 2 and 4 thousand meters) not competitive. Than the cost of extraction of shale gas is not convenient. In fact many investor decided to close the plants for the extraction of shale gas. In this way they have lost a lot of their investments. For example the big Australian company BHP decided to close 40% of its plants for the extraction of shale gas operating in the States. Unfortunately many big companies (for example Baker Hughes, Halliburton, Schlumberger Co) that have believed in this business, today are in financial difficulties.

According to Bloomberg the crisis will also affect small and medium-sized companies that, in recent years, invested into the business of shale oil and shale gas. These companies have a high level of liabilities, they will return the loans with difficulty.

The fracking has received many disapprovals because of the risks involved and the potential risk for humans and the environment. In many countries there are protests on extraction of shale gas, the lasts were in California, Sussex, Bulgaria, Algeria, Queensland. First risk comes from the fracturing of the subsoil that often provokes earthquakes up to 3.6 degree on the Richter scale. The scientific agency of the government of the United States (United States Geological Survey) wrote in April of 2015 a very detailed report on the connection between earthquakes and extraction of shale gas. According to USGS in the last seven years geologically staid parts of the US, that were triggered by drilling for oil and gas, have seen earthquakes like they haven’t seen for millions. The countries where there have been more earthquakes are Alabama, Arkansas, Colorado, Kansas, New Mexico, Ohio, Oklahoma and Texas. Than to extract the gas is used dangerous substances for the health.

The enthusiasm for this energy resource has infected also Europe until last year. European countries especially Poland hoped to become independent in terms of energy.

There are 70 shale gas wells and drills in Poland, more than any other European country.

In particular Polish reserves are estimated between 800 and 2,000 billion cubic meters. In fact many local and foreign companies implemented explorations in fifty deposits.

Also in Poland the situation is changed in the last months. The companies Exxon Mobil, Marathon Oil, Talisman Energy and Eni, in light of the fact that oil prices continued to fall, decided to leave the exploration of shale gas in Poland.

These companies have been discouraged because of poor earnings than expected, regulations unclear and geological difficulties for the extraction of shale gas.

In Poland, ConocoPhillips is now the last international company that did not leave the exploration of shale gas. Moreover in all European countries, the enthusiasm for shale gas is decreased for example in UK a local council of the county in recent months has blocked a project supported strongly by the British government.