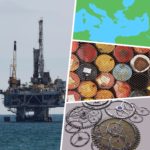 This summer saw the PN party faithful geared up with political infighting to choose from among four contenders who were vying for popular support as the best candidate for party leader. The objective is to replace Simon Busuttil who resigned as leader of the PN/PD coalition following a defeat at the polls in June.

In this race for popular support there is no desire by any of the contenders to distinguish themselves as catalysts of change. None of the four candidates bothered to list any major reform (if elected leader) towards achieving new economic goals, even more so where it concerns future energy roadmaps and related oil exploration initiatives. The results are clear to all: Malta has the worst oil exploration record in the Mediterranean, with only 13 wells drilled in the past 60 years. Compare this to 6,000 wells tested in Italy, and 500 dug in Israel.

Intuitively, the gargantuan challenge present to the CEO of our National Oil company is the search for international investors with deep pockets to seriously start exploration in our relatively untapped Continental Shelf, emulating the success registered in Cyprus, Egypt, Libya, Israel, Italy, Tunisia and Algiers. Ideally, any future gas discovery can coincide with the plan to lay an underwater gas pipe linking us to Italy.

Two years ago, OPM was asked to confirm a rumour about a declaration by Italian Ambassador Giovanni de Vito saying that there is a “gentleman’s agreement” between the two countries under which no licences would be issued in the 18,000 square kilometre zone until a formal agreement on possible joint exploration is reached. In reply to questions, the spokesman at OPM said: “As stated by the Italian Ambassador, there is no formal agreement on oil exploration between Malta and Italy and negotiations are ongoing. Both countries are engaged in constructive discussions and enhancing confidence building with the aim of agreeing on joint activity,” the spokesman said.

The minister previously responsible for oil exploration, Joe Mizzi, also assured the Times of Malta about discussions with Italy on possible joint exploration in the disputed area. These were ongoing. He stated “no licences have been granted by Italy on Malta’s continental shelf as far as the government of Malta is aware”.  The penny has dropped that we have no current exploration activity planned for the foreseeable future. Much of the blame can be attributed to politics.

In order to get the licensing process renewed, the government needs to commend two decrees: the first dividing Malta’s exclusive offshore zone into blocs and setting their coordinates; the second specifying tender protocols and establishing how the oil produced would be shared between companies and the government. Another serious caveat is to reach agreement with neighbouring countries on the legal boundaries of our Continental Shelf.

At this juncture, it is opportune to give some information on exploration progress reached by countries located in the central and eastern Med basin. To start with, to our north lies the largest offshore field in Sicilian waters termed the Vega and others which were discovered in the mid-fifties. Naturally to the south lies the oil rich Sirte Libyan offshore basin and to the west the equally prolific Tunisian wells. It is encouraging to note how north Africa offshore fields have been extensively explored and only two years ago Egypt announced the discovery of the offshore Shorouk Concession, which contains the massive Zohr gas field—the largest natural gas field ever discovered in the Mediterranean. It is estimated to contain 30 Tcf of gas according to Italian energy firm Eni.

Moving on to the Levant basin we notice how Israel itself has made some of the biggest discoveries so far. In 2009, companies exploring in Israeli waters found the Tamar field, containing some 8.4 trillion cubic feet of gas. Another discovery by Noble Energy announced the larger deep-water Leviathan field with 16 trillion cubic feet of gas. It is encouraging to note that Cyprus and Israel have signed a memorandum of understanding to cooperate on energy, which would direct Israeli gas exports to the proposed $15 billion three- to eight-train LNG export facility in Cyprus offering access to both European and Asian markets.

It discovered a gas field termed Aphrodite with more gas than can be used by Cyprus’s population, leaving around 90% available for export. It is eager to become a natural gas producer next year, having its second licensing round attracting 15 consortia for the 12 blocks on offer. While the existence of large fields in the eastern Mediterranean has been known since 2009, however it is strange that Beirut has yet to start drilling.

Like Malta, Lebanon is slow in its drive to join the ranks of oil-producing nations. It has ongoing disputes with neighbouring countries which need to be resolved before investors risk placing their bid for new concessions. In fact, it appears that Lebanon’s southern-most blocs overlap with maritime territory also claimed by Israel. Recently, Lebanon’s prime minister urged the United Nations to increase pressure on Israel to end what Lebanon claims are Israel’s violations of its borders, and to help prevent it from exploiting Lebanese oil and gas.

Lebanon contends that Israel has illegally taken part of its maritime territory, an allegation Israel denies. Lebanese officials warn that Israel might steal its gas through “horizontal drilling”, a modern technique that enables a driller to extract far from the original spot where a drill entered a well containing gas or oil. Regardless of such obstacles, the Lebanon government last May proudly issued an international offer for a number of offshore concessions. Recently it announced the final list of companies eligible to bid for its first-ever round of licensing for oil and gas exploration and production, which is due to start in September. Saddled with debt, Lebanon could do with the revenue it would receive from exploiting its offshore hydrocarbon reserves, estimated at 850m barrels of oil and 96trn cubic feet of gas.

In conclusion, back to Malta it is almost two years ago that the media reported a sensational statement by Infrastructure Minister Joe Mizzi in Parliament who, in a cavalier way, reminded all and sundry about his prophetic prediction on a positive offshore oil discovery. This pronouncement mirrors his solemn declaration two years ago that oil and gas were present in Malta’s offshore acreage. Thus, having recently set up our own National Oil Company headed by an ex-manager of a local soft drink bottling company this comes not a moment too soon. This company needs the best technical brains to engage with the oil majors urging them to risk their capital in a refreshed wave of mainstream exploration.

As stated earlier, history has taught us the lesson that palliatives are a waste of time, therefore, we need to continue political negotiations with Italy and Libya to resolve any disputes. Future generations deserve the opportunity to enjoy the fruits of a professionally administered National Oil Company to be adequately resourced in its noble quest to diversify our dependence on existing economic pillars.