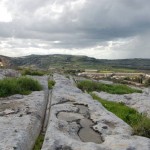 Hurrah for the environmentalists who have lobbied – unsung and unaided – for years to protect this sacred burial ground from the ravages of demolition and building work. According to a recent announcement by Mepa¸ the area has been declared as rich in garigue community and is being listed as an area of ecological importance. This sacred burial ground¸ which contains a network of rock pools and ancient tombs¸ is considered by experts to date back to the Bronze Age.Residents can rejoice and give a sigh of relief that¸ after so many years¸ the tomb area at Tal Wej that is currently lying in ruins is to be scheduled by Mepa. For so many years¸ building permits have slowly encroached on this large tract of land located on the outskirts of Mosta.

When we have such a rich heritage in Mosta¸ it makes you wonder why permits have been issued for the building of villas bordering the site. According to Mepa¸ the now derelict site¸ which has practically become a dumping ground for discarded building material¸ features dolmens¸ cart-ruts¸ ancient quarries¸ shaft and chamber tombs¸ vine trenches¸ a 16th-century chapel and two corbelled huts.

At last¸ residents of Tal Wej can expect the authorities to protect the area and its rocky surrounds so that it can be enjoyed by present and future generations. Can we expect that funds from the EU will be allocated to clean the tombs and rebuild the rubble walls to cordon off this heritage that our forefathers left us to enjoy and cherish. Perhaps the ghosts of our Bronze Age ancestors buried in the Tal Wej cemetery will rise from their chamber tombs to solicit our attention to respect their abode on the outskirts of Mosta. The job of cleaning the site and preserving our heritage is another problem for a beleaguered and cash-strapped Mosta council. The road surfaces in the built-up part of Tal Wej are also in a pitiful state and one wonders how such a sorry state of pot-holed roads persists in residential areas¸ when the government claims that millions are being allocated to re-surface badly finished roads in deserving areas.

Last winter took its toll of Mosta’s roads¸ resulting in minor cracks widening to create multiple potholes. Regrettably¸ scant attention was given to repairing them (let alone entirely rebuilding them) and Mosta council appears to be in no hurry to resolve the problem. Surely¸ with a local election next March¸ Mosta councillors cannot ignore the seemingly war-torn roads. So far¸ the current practice of light patching of deep holes is a laughable and expensive solution¸ but then the council has its own priorities .It complains of a repair backlog that it cannot afford to clear. Instead of continually patching up third- world standard road surfaces with a bucket of tar¸ central government should dig deeper and ask Transport Malta to fund such repairs.

With over €60 million collected by Transport Malta in road and vehicle taxes¸ more accountability is requested by motorists and the public in general. In this article¸ I would like to make some suggestions in order to demonstrate that¸ with more courage and vision¸ some of the problems can be overcome. It is true that driving on congested roads has been exacerbated by Arriva’s over-sized buses and the traffic situation has become so unacceptable that the only way forward is to have a bold strategy to promote cleaner and safer roads. Central