ice guys finish last. The only reason for a business to exist is to increase shareholder value. As long as it’s legal¸ you can do it. If it’s not legal and the fines are less than compliance costs¸ you can do it. If you think you won’t get caught¸ you can do it. Caveat emptor. Enron¸ WorldCom¸ Bernie Madoff¸ Three Mile Island¸ Chernobyl¸ Fukushima. And lest you think it’s only business¸ check out the Federal Workers Unions¸ Teacher’s Unions and the Teamsters. And go ahead and name your favorite political scandal; Joe Wilson¸ Tom Delay¸ Charlie Rangel¸ Richard Nixon¸ Bill Clinton. The list goes on and on and on. How about the sports figures and scandals?

Your list will be different than mine or your neighbors. What outrages you may be different than what outrages me or your neighbor. The point is that we need to be more than a nation of laws. The disaster in Japan is what started me thinking about all this. Despite the earthquake and tsunami¸ there were no troops called in to stop the citizens from looting or taking advantage of the situation. Some will argue that Japan has paid a price for this “compliance” or utilitarian society. That isn’t clear to me. They were¸ until recently the second largest economy in the world. Their products are sought after. Even the latest “scandal” with unintended acceleration of Toyota cars has proven to be not a defect in quality but rather a user error.

So do we “do well by doing good”? I find it interesting that it appears that many companies do – over the long haul. It is easy to make a short term gain by being less than honest or to focus solely on the bottom line. It seems¸ however¸ to build a sustainable¸ profitable business¸ one must be fanatical about providing high quality products and to be authentically concerned about doing what is right for the customer/client. 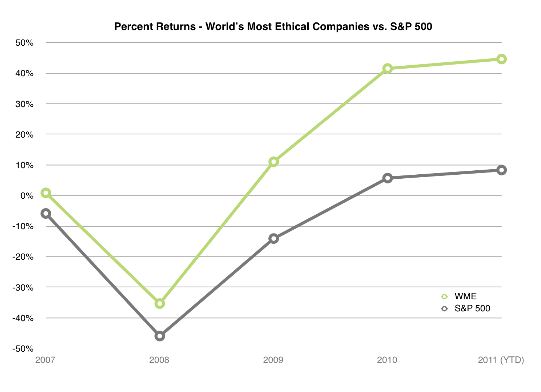 Here is a bit of the methodology: “Ethisphere conducted data analysis on hundreds of companies based on their responses to the survey¸ as well as documents and information researched and requested by Ethisphere to confirm survey responses. Every company was then given an EQ score based on the results of the survey and measured against seven distinct categories. These categories were Corporate Citizenship and Responsibility; Corporate Governance; Innovation that Contributes to the Public Well Being; Industry leadership; Executive Leadership and Tone from the Top; Legal¸ Regulatory and Reputation Track Record; and Internal Systems and Ethics/Compliance Program.”