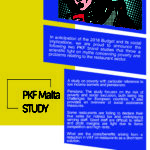 It is encouraging to hear just a few days ahead of the budget speech that Malta has improved its competitiveness ranking in the World Economic Forum’s Global Competitiveness Index 2016-17, rising from 40th place to 37th. This improvement is not easy to obtain since it depends on a number of macroeconomic factors, some of which are beyond the control of the government.

Can we rest on our laurels now?  Not really – but it is a good start knowing that out of a total of 137 countries we rank ahead of Italy, Portugal, Slovenia and Croatia. The government proudly announced a budget surplus for last year. This is a welcome effort to reduce public debt and precipitate an increase in national savings.

Our flourishing economy registered an extraordinary growth in the last years, in contrast with European members’ trend, yet this must not mislead us and lure us to wave a flag of complacency. There is a number of social challenges that affects our society which need to be addressed in a constructive and innovative way to avoid a pejorative effect in the future. One of these challenges is the retirement benefits in Malta. A lot of people opine that the statutory pension mechanism, unless supplemented by external income, will not be sufficient to help people falling into the poverty trap. To check this PKF has volunteered to conduct a number of ‘one to one’ questionnaires and run a confidential survey among tenants in old people’s homes housed in three government run centres.

The main purpose for this study was to clarify the controversial aspects of poverty, identifying the shifting needs of people and to investigate that cohort aged 65 and over, which is usually identified as more at risk of suffering from social exclusion or lack of income. According to the latest 2016 data, Malta registered a reduction in the risk of poverty and social exclusion (AROPE) rate from 22.4% to 20.1%.  It is interesting and necessary to note that when one splits this value by age group or household type one finds the evidence that this improvement has not benefited everybody.

In particular, in the age group of 65 and over the AROPE rate increased from 23.7% in 2015 to 26.1% in 2016. By 2030, the number of people within this age group will exceed that of young people aged 15 to 24. This data shows how society is getting older, so it will inevitably face various challenges. For these reasons and several more it is necessary for the government to have a deeper understanding of senior people’s pattern of expenses which is a prerequisite to guarantee a respectable quality of life.  If a positive equilibrium is reached then elderly people can live a healthier life and, therefore, can remain active and participate in the community. It goes without saying that elderly people have a rich endowment to bequeath to society. Taking into account the trend showing a decline in the number of young people, under ‘the pay-as-you-earn system’ this poses a challenge for the maintenance of a pension fund which over time will see fewer workers contributing for each pensioner. When questioned most pensioners replied that the pension they receive is enough but others argue that they cannot afford to go to any events, concerts or museums. For this reason, such pensioners feel detached from society.

Unfortunately, relative and more so absolute poverty is still a veiled problem that we have to quantify. An altruistic drive to fight relative poverty and social exclusion is a common policy with political parties and finds favour with stakeholders and NGOs. Individuals who live in poverty are more likely to produce adverse outcomes for themselves (i.e. abuse of alcohol and drugs) and for society (augment criminal activity).

The public pension system (old-age pension, survivors’ benefits and invalidity pensions) is reinforced by a non-contributory welfare programme. The national scheme is called the “two-thirds pension”. The two-thirds pension aims to provide a pension equivalent to two-thirds of the average earnings of insured persons capped at a fixed limit. However, there is also a minimum pension guarantee that is about 50% of the current average wage. Is this welfare not adequate and acceptable in a growing economy of 2017? Is it buttressing the welfare of our society?

The first noteworthy observation from the survey results is that almost 70% of families nowadays rely on a single pension. Be that as it may it is advisable to focus our research on households composed of two people or more that only receive one pension, since without other sources of income these may easily fall below the poverty line. Furthermore, respondents receiving the maximum pension said the two-thirds pension system is not representative of their total lifetime contributions given that the pension limit is capped. Only minor increments are triggered each year as a result of the Cost of Living Adjustment.

“Higher rents for flats, higher consumption of electricity, water, healthcare costs, internet connection charges etc., all push the cost of living on an inflationary trajectory. This is the main reason why the spending power of a single pension is dwindling”

When asked if they can afford to save money, more than a half of all respondents said they spend their entire pension. Respondents with the lowest pension income, in this case lower than €500 in a month, said that they are not able to save money. Again, pensioners who receive €800 and more said that often the pension cheque does not stretch beyond the month.

Talking with people from nursing homes we find out that as the level of pensions is low and most do not have any alternative sources of income, such as contributions from relatives or friends, then probably they cannot save. Saving was identified as being one of the most important means to avoid running out of finances when unforeseen events occur, indicative of the ingrained aspect of Maltese culture – ‘save for a rainy day’. It is important to emphasize that nowadays higher rents for flats, higher consumption of electricity, water, healthcare costs, internet connection charges etc., all push the cost of living on an inflationary trajectory. This is the main reason why the spending power of a single pension is dwindling.

When people do not make ends meet they try to find other sources of income.  It was considered that one of them could be gambling, which can double up as a source of entertainment in addition to being a possible source of alternative income. Could we test to see if a positive correlation prevails with the problem of poverty and prevalent gambling habits?  This exercise is a complex one and calls for more data than PKF could obtain from the public domain.

In conclusion, our primary research was to try and ascertain if income of single pension couples is enough to live by. We questioned our first hypothesis, which is “retired people are at risk of poverty”.  On average, results show that despite the compulsion to live a more frugal life style, coupled with a lack of savings yet overall the level of satisfaction of the pensions system is good.

As the economy expands so is the need to reform the P.A.Y.E system fine tuning its single pillar and gradually introducing a sponsored second pillar.  How can retirement be attractive if it is capped and not inflation-proof? However, it is not expected that the State alone carry the burden to provide for universal retirement except for those on the poverty line and incapacitated persons. PKF Malta believes that more empirical studies are to be sponsored on the subject of social welfare reform with the noble aim to facilitate the equitable sharing of richer pickings of our economic harvest. The ubiquitous trickle-down effect must permeate faster to reach the lower hierarchy of the community.