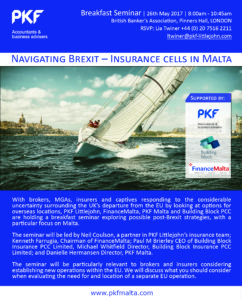 PKF has been in the forefront to promote Captives in Malta long before the BREXIT talks and to facilitate this it planned an interesting event to place Malta on the list of serious options, by co-hosting the BREXIT Briefing in London, which is in high demand.

The seminar will be particularly relevant to brokers and insurers considering establishing new operations within the EU. We will discuss what you should consider when evaluating the need for and location of a separate EU operation.

We will discuss what one should consider when evaluating the need for and location of a separate EU operation. The session will then explain why Malta might be a suitable location in which to establish an EU insurance intermediary or carrier operation. We will also look at how insurance intermediaries – including those considering setting up an insurance carrier – could utilise a ‘protected cell’ arrangement to guarantee their future access to EU markets post Brexit.

The session will provide some practical suggestions and will include a panel Q&A. After this, there will be an opportunity to meet with the presenters on a one-on-one basis. Programme: Breakfast will be served from 8.00am. The seminar will begin at 8.30am and should conclude by 10.30am, with time for networking after that.

Demand is encouraging for such an event and a series of follow ups emanates from the prevalent unknown of what happens in the insurance market following the invoking of Brexit?  Will this have any ramifications or changes in domiciles of Captives?  So far there are more questions than answers – some UK insurers adopted a ‘wait and see’ approach, whilst others where pro-active in their approach with plans already in place for day one of BREXIT. To start with Lloyd’s of London Chief executive Inga Beale, has announced that the new Lloyds Insurance Company will be set up in Brussels, to ensure passporting into EU’s single market, in view of the potential loss of crucial licencing rights following a BREXIT. Other comments come from prominent officials the likes of Xavier Rolet, chief executive London Stock Exchange who warned that if the government fails to provide a clear plan for post-BREXIT, this could cost the City of London up to 230,000 financial services jobs (The Guardian).

At this stage let us fast zoom onto the insurance market, many insurers in London write business throughout the single market. The EU is a significant market accounting to 32% of the global insurance market with assets of almost € 9,800 billion. With almost €9800bn of assets this is equivalent to 61% of the GDP of the EU. (insuranceeurope.eu)

Therefore, it is progressively becoming more evident that UK insurers relying heavily on their EU Single market passport, need to address the uncertainty surrounding their current business model. The spontaneous question which follows is where to establish one’s presence in the EU, to continue to provide its customers a seamless product. The answer is complex, yet Malta should certainly be on the list of serious options.

It is no secret that some foreign banks and insurance companies in London have started to plan to relocate although for now, the exodus is subdued as London is a global financial hub, on a par with Wall Street.

What makes Malta an attractive jurisdiction?

Quoting Joe Portelli, chairman of the Malta Stock Exchange, he said “Malta offers a highly competitive, cost-effective solution for any insurance company looking to establish itself within the EU. We are a pragmatically well-regulated, English-speaking financial centre with a hardworking and educated workforce”.

It is evident that the industry prefers a friendly BREXIT, however with current headlines such as “UK-EU relations hit new low as Theresa May viciously attacks European politicians” and “Theresa May’s disastrous Brexit meeting” (Independent) or “Brexit at risk of turning into ‘trainwreck’” (The Telegraph), this started off the BREXIT on a hard note. “The EU has also said that nothing is agreed until everything is agreed,” May said on the BBC’s Andrew Marr Show.

The questions, most are asking, will UK start negotiating trade agreements with third countries; such as Malta, to be signed after leaving the EU? One of beneficiaries of BREXIT may well be Malta, because of its EU membership, its efficient regulatory and legal environment and its highly educated, English-speaking workforce.

Kenneth Farrugia, chairman of FinanceMalta, commented: “Malta’s proposition as an international financial centre has continued to enjoy momentum, as evidenced by the sustained growth experienced in 2016 and the conduit of international business operations currently seeking an investment services licence through the Malta Financial Services Authority”.

Turning to financial services, it would be imperative for London-based banks/insurance companies to maintain full “passporting” rights for services within the EU – rights that they will certainly forfeit under a hard exit. So many wonder what options in the negotiations will be open for London in case of a hard Brexit. To mention one model one can refer to CETA (The Comprehensive Economic and trade Agreement between the EU and Canada) as a potential model when leaving the Single Market to be replaced by a trade deal with the EU. This was a successful attempt by EU to reach a trade deal with Canada and may well prove to be a landmark agreement, which may be assimilated by London to move forward should it forfeits “passporting” rights. Simply put the signed accord CETA, will pave the way for EU companies to be able to bid for public contracts in Canada at all levels of government so for the first time this will open trade with both Canada’s federal government and municipalities to EU exporters to potentially buy goods and services worth over €30 billion. The trade pact will bring new opportunities for European companies by creating access to the Canadian market in key sectors such as financial services, telecommunications, energy and maritime transport.

So how can an ad hoc agreement such as CETA or TTIP ever help to solve the lack of passporting rights once UK moves out of the Single Market? The answer is a complex one and there is no clear indication how negotiations will pan out but these two trade agreements which EU is planning with USA and Canada respectively may be used as a backdrop for a new trade deal in the context of a hard BREXIT.

Time is of essence since Captive owners and insurers in UK have a mere two years from March 2017 to formulate any contingency plan. It goes without saying that maintenance of access to European markets, in particular financial services, is a key objective for the UK in its negotiations, although certain EU leaders have already made objections to the UK’s wish to “cherry pick” particular options and benefits. In conclusion, the harvest of opportunities is rich for those who like FinanceMalta and PKF venture forth and as they say the early bird catches the worm. Interested parties wishing to attend can contact Mrs Hermansen on info@pkfmalta.com.

Danielle Hermansen ACII Chartered Insurance Risk Manager, Mgt (Maastricht), is a director at PKF Malta. She has been in the insurance industry for 15 years. Working primarily as a commercial underwriter, she has also worked as an insurance broker and insurance manager specialising in captive management.