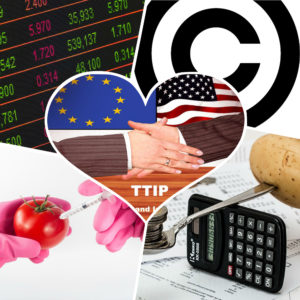 While TTIP had been the main target of a lobby group resisting globalisation, the signature process for CETA received a warmer reception from most EU members except Belgium. EU trade commissioner Cecilia Malmström said last month that talks on TTIP had not broken down and the aim was still to strike a deal before President Obama left office. Equally hopefully after conclusion of the 15th session meeting was US trade representative Michael Froman. He told German magazine Der Spiegel that talks on Transatlantic Trade and Investment Partnership (TTIP) were progressing.

But it seems like a pipe dream – considering that so much resistance is mounted by protestors in Europe against signing the deal. For instance, this week some were shocked reading the news about the blockage of the Canada/EU trade deal termed Comprehensive Economic and Trade Agreement (CETA) by a regional government within Belgium.

CETA is a deal on which talks started over seven years ago. On the other hand, the US and the European Union have been negotiating the TTIP, for three years. Both CETA and TTIP aim to reduce or remove a wide range of barriers to transatlantic trade and investment, but so far these initiatives have proved controversial in Europe.  With CETA, EU companies will be able to bid for public contracts in Canada at all levels of government so for the first time this will open trade with both Canada’s federal government and municipalities to EU exporters to potentially buy goods and services worth over €30 billion.

So far, no other international agreement was ever concluded by Canada which offers similar opportunities to facilitate business flow by the creation of a single electronic procurement website combining information on all tenders to ensure transparency on procurement opportunities. One can sympathise with its supporters, who say the deal could deliver economic gains of more than $100bn to both sides of the Atlantic. Sadly, critics argue it would give too much power to multinationals at the expense of consumers and workers.

In both deals it seems that the fly in the ointment concerns dispute settlement mechanisms. Thus, we see how (ISDS) mechanisms are perhaps the most contentious aspects of TTIP and CETA. These mechanisms aim to provide foreign investors with the right to sue the EU or its Member States in private tribunals over potential losses due to unfavourable new public welfare regulations.

While TTIP had been the main target of a lobby group resisting globalisation, the signature process for CETA received a warmer reception from most EU members except Belgium. Can we label the acceptance of CETA the litmus test for Europe?  Alas talks to accommodate Wallonia to sign CETA ended in failure last week yet attempts to clarify existing objections will continue.

Wallonia’s leader, Paul Magnette, said it was “impossible” to find an agreement with the Belgian region’s leadership over a declaration to give guarantees on some elements of the deal. Typically, he mentions concerns about the threat of surging pork and beef imports from Canada and fervently opposes an independent court system to settle disputes between states and foreign investors, which critics say allows multinationals to dictate public policy. This week the Walloon Prime Minister, Paul Magnette, warned: “We will never decide anything under an ultimatum or under pressure.”

His counterpart in Belgium’s Dutch-speaking Flanders region, Geert Bourgeois, said the blockage was “a real shame”. On home soil, we rejoice that not much negative publicity is evident in Malta on CETA while it is reassuring to read that the World Trade Institute (WTI) has published updated country-specific results of the impact of TTIP on the Maltese economy concluding that it could lead to a marginal improvement in GDP.

Utilising the latest economic data for Malta from 2015, the findings conclude that TTIP would be beneficial for the country. This opinion was well received at a recent presentation on TTIP given at the behest of the American ambassador in Malta last week even though an MEP on the panel expressed his view that there is popular resistance by the Social Democrats in Brussels harnessing fears over creeping corporate power and the roll back of environmental and social standards.

For instance, he argued that one cannot under emphasise objections over the importation of a vast variety of genetically modified agricultural products from the USA. So far these have been resisted by European consumers.

Back to CETA, German protestors say it gives too much power to multinationals – unbridled power to intimidate governments. Readers may reason that CETA cannot be all doom and gloom as there must be advantages in lowering barriers to trade with Canada. For starters, CETA is expected to increase trade between the partners by 20 percent and boost the EU economy by 12 billion euros annually. Canada will benefit by circa C$12 billion.

The trade pact will bring new opportunities for European companies by creating access to the Canadian market in key sectors such as financial services, telecommunications, energy and maritime transport. Other benefits are too numerous to mention. The principal ones include enhanced protection of European innovations, artists and traditional products, guaranteeing an improved level playing field in the intellectual property rights sector.

Canada will as a result upgrade its copyright protection in line with World Intellectual Property Organization rules. For instance, one expects better intellectual property rights for protecting inventions, and patents over new pharmaceutical products. Equally protected will be European musicians, artists, and others working in the creative industries. There will be additional safeguards for EU farmers and small businesses involved in food production.

In addition, the chapter on technical barriers to trade contains provisions to improve transparency and foster closer contacts between the partners in the complex field of technical regulations. It goes without saying that this agreement between the EU and Canada further strengthens links between respective standard-setting bodies. Both sides have agreed to accept the conformity assessment certificates which each other’s regulatory bodies issue in a number of sectors, such as: electrical equipment, toys, machinery and measuring equipment.

In conclusion, one appreciates that it is quite a tough cookie to secure unanimous agreement by all 28 member states over the signing of complex and ambitious trade pacts.  One may remember the tortuous road for the Commission to receive unanimous agreement following treaty changes in the past when for example one cites the crucial amendments to the Lisbon Treaty that were almost approved by all but finally blocked by the Czech and Irish members.

Now it is not surprising that with Brexit talks looming over the horizon some UK politicians see CETA as a potential model for a trade deal with the EU. This may be a false hope since services make up about 80% of the UK economy yet these are only partially covered by CETA. In case of financial services it would be imperative for London-based banks to maintain full “passporting” rights for services within the EU – rights that they will certainly forfeit under a hard exit.

The writing is on the wall that next year will be a difficult one for campaigners in favour of signing transatlantic trade deals. Voters on both sides of the Atlantic have a number of crucial decisions to take when choosing leaders in the coming elections. On a positive note, politicians in their respective manifestos all sing from the same hymn book, extolling the merits of increased international trade that acts as the harbinger of millions of new jobs. Only time will tell if once elected they remain scrupulously faithful to their promises.