As published on The Malta Today on Wednesday 12th March 2013

It’s sobering to know that whether we like it or not¸ our sons and daughters will carry a heavy legacy of 6 billion euro (and growing) in accumulated national debt¸ which at the current GDP growth rate of 2% per annum -the high rate in Eurozone- may take us a 1000 years to redeem with interest.

But enough moaning and let us look on the bright side and fully rejoice that our financial services sector is booming and our banks have passed with flying all stress tests mandated by ECB with flying colours. There are more positives considering that the 2007 recession¸ our banks have registered double digit growth in pre-tax profits and reported exemplary “loans to capital” ratios¸ as can be confirmed by a clean bill of health recently issued by Brussels.

What makes our banks so Teflon coated? Could it be a Midas touch or the use of superior risk management techniques that has created this oasis of growth¸ when elsewhere in the Eurozone has been drought?

The banking sector is divided into two distinct sectors – ‘non-core-‘ and ‘core’ domestic banks¸ like Bank of Valletta¸ HSBC Malta¸ APS Bank¸ and Banif Bank¸ which act as the main financial intermediaries providing banking  services to residents of Malta. Quoting the EC’s recent in-depth review of Malta’s economy¸ one is surprised to read that when examining the structure of income of the core banks there are some indications that there could be anti-competitive behaviour¸ especially over interest rates being charged on loans.

It’s no secret that banks in Malta do not follow faithfully the ECB bank rates¸ such that businesses are charged 3% higher than the EU average. Central Bank governor Josef Bonnici in the past called on core banks to ‘align their margins’ with those of other European countries. ‘Interest rates on loans to businesses are currently around two to three per cent higher in Malta as compared to Germany¸ Netherlands¸ Finland¸ Austria¸ and Luxembourg. In contrast deposit rates offered by Maltese banks are broadly in line with those across the euro area’. 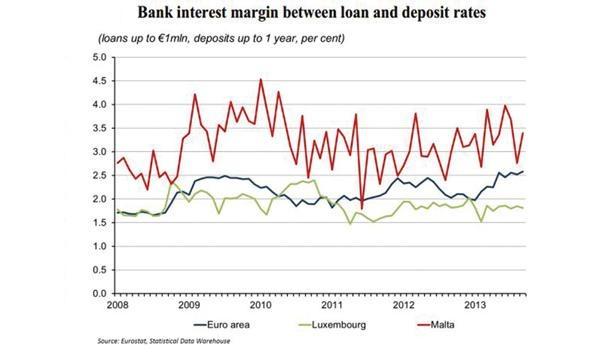 A closer alignment of margins with those of our peers appears to be overdue. The recently proposed Budget measure to conduct a review of bank charges to businesses makes perfect sense to me. The IDR’s aim revolves around the desire to keep EU economies competitive at both labour and transaction costs kept in check.