People who are traveling to another country to obtain medical treatment there, are called medical tourists. That actually is not the name for the people, but it is a moving action. Traditionally, people would travel from less-developed countries to higher developed ones which are big medical centers, to get the treatment over there, which is most often not available in their own cities. The recent trend is different. People go to third-world countries from big cities, with a well-developed healthcare system to get treatment there, in order to save money or get even a treatment which is not legal in the home country.

However the phenomenon in Europe and around the world of traveling abroad because of medical treatment is not new. Notations show that already thousand years ago the Greeks pilgrims traveled from all over the Mediterranean to small sanctuaries with the faith to get healed by their gods. Also in the 18th– century people went to England, to visit SPA centres, because they were places with supposedly health-giving mineral waters, treating diseases from gout to liver disorders and bronchitis. 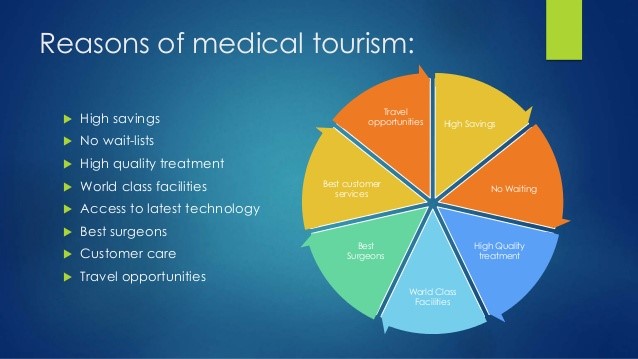 High cost of health care, long queues for certain procedures, the advancement in other countries according to their technology and standard of care and also the simple possibility of international travel are all factors that are leading people to medical tourism. Besides the fact that people in the UK need to wait weeks for certain procedures, they need also time for saving significant amount of money, which is the main reason for Americans to go abroad for treatment. Eventually many surgery procedures in foreign destinations cost much less the price than they cost in their home countries. For example, a liver transplant that costs $300,000 in America, costs about $91,000 in Taiwan. The waiting time for a hip transplantation of 26 weeks in Canada seems also to be a veritable reason for looking for some alternatives abroad.

The trend seems to escalate within last decade and expansion of EU zone, when a big surge of people were looking for medical treatment in other countries, especially in dental services. Since then a lot of things has changed. The market is getting bigger and bigger. Formerly they have been not so many possibilities, just a few treatment centers and just some destinations to choose from.  Local specialists did not seem to be as much exposed to international patients as today.

Currently all 28 EU member states have declared themselves as a medical tourism destination, offering multiple choices of treatment. In this effect, in 2011 an EU Directive on cross-border healthcare was passed in and came into force in every country of the European Union in October 2013. The Directive clarifies patients’ rights and entitlements to cross-border healthcare and establishes standard rules for reimbursement of healthcare received in another European Union country. It also supports the patient’s choice and provides high-quality and safe healthcare. Supposedly one of the main achievements of the Directive is the possibility for the patient to make an own decision about their healthcare provider.

In this picture you can see several steps of seeking treatment with medical tourism. 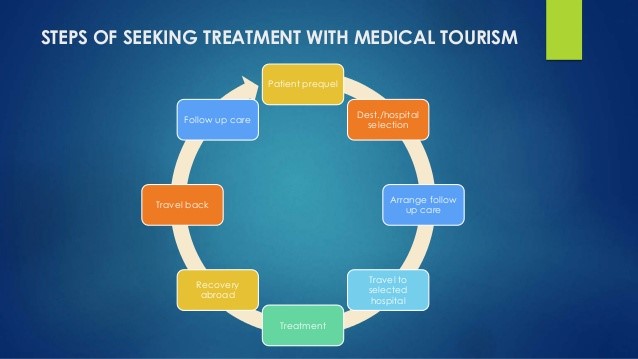 When considering EU members, it is not just Germany with its great healthcare system and a huge knowhow in cardiology (heart surgery) or the Czech Republic with great prices for cosmetic surgery, it is also Malta ( EU member since 2004) which is creating a new economic-medical niche.

As a Mediterranean oasis, as it was called in the past, Malta is even working more on the reputation to get the prime position for medical treatment. The Islands itself are promoting their well-educated specialists, who have very often a great medical practice from UK or United States. Besides that, the medical standards are in accordance with the European requirements. Malta specifies itself as a very highly ranked in terms of health practice and the ability to give treatment from the simplest to the most complex with excellent appointed private clinics, no waiting lists, the best location and fair prices.

One of the private clinics in Malta (Sliema) is the St James Hospital, which provides a comprehensive range of healthcare services. Furthermore, Maltese Government is already planning to involve private investors to open new private hospitals and a medical school in Gozo.

Summarising, medical travel is not just within the European members, all in all every year about 8 million patients from all over the world decide to get treatment in a different country. About $24-$40 billion is being spend in this area. The top destinations worldwide are Costa Rica, India, Israel, Malaysia, Mexico, Singapore, South Korea, Taiwan, Thailand, Turkey and United States. But it is not just about saving costs, even though this is one of the biggest bodies in medical tourism. The factors such as availability and the quality of healthcare are the ones with the highest rank among patients.

At this statistic you can see the costs for the medical procedures from three of the most popular destinations in compare to the U.S. 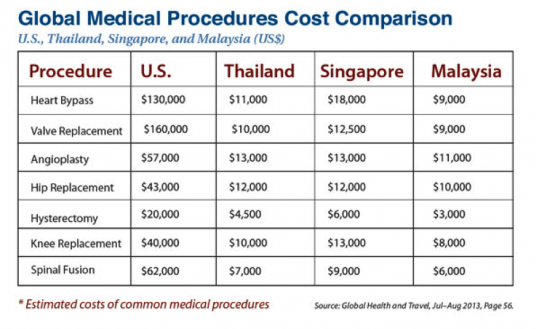