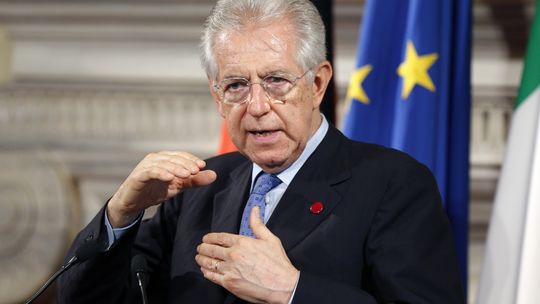 “A great message“: Italian Prime Minister Monti is thrilled with the verdict of the Constitutional Court that approved the bailout ESM subject.

In the euro crisis¸ the pressure on Germany rises. In August¸ German Chancellor Angela Merkel received Italian Prime Minister Mario Monti in Berlin. Before the working visit¸ Monti warned Germany of an “own goal” in the euro crisis. He warned that this scenario could happen if the European Central Bank (ECB) do not block the way to buy up government bonds of countries in crisis¸ the Prime Minister told the newspaper “Il Sole 24 Ore”. Pointing to the gap between the interest rate and yield on Italian and German bonds¸ Monti said it could lead to a “potential rise in inflation for Germany which¸ I believe¸ doesn’t correspond to the ECB or German government’s wishes.” The Italian premier explained that inflation could result from a substantial rise in the amount of money available within the 17-member eurozone along with low interest rates and rising bond prices.

Expensive oil has fueled inflation in the euro zone in August. The annual inflation rate¸ according to recent data from the statistics agency Eurostat on the 14th September stood at 2.6 percent. In July the figure was 2.4 percent. Energy cost 8.9 percent more than in the same month last year¸ food prices rose by 2.6 percent. Alcohol and tobacco (up 4.5 percent) as well as transport costs (up 4.8 percent) caused additional inflation. The expensive oil drove up the prices in Germany¸ where prices in European comparison increased by 2.2 percent.

Inflation in the 17 countries of the euro area is higher than the ECB would have liked. The European Central Bank sees price stability ensured with an inflation rate of just below 2 percent. ECB chief Mario Draghi expects¸ however¸ that the inflation rate will level adjustment in the low growth in the euro area over the next year again below this threshold. He defended the course of the central bank in the euro crisis and dismissed the harsh criticism¸ especially from Germany. “The European Central Bank will do everything necessary to maintain price stability¸” Draghi wrote in a commentary for the German weekly newspaper “Die Zeit”. “She will remain independent and will always act within their mandate.”

Lately experts¸ mainly from Germany¸ accused the ECB of not fighting against the debt crisis “repeatedly exceeding red lines”. The purchase of government bonds threatened the stability of the euro and put their independence at risk. In early August¸ the ECB had promised to buy more government bonds from countries in crisis¸ but this is subject to fixed terms. Before countries like Italy can receive support¸ they should therefore provide an alternative application for permanent rescue fund ESM and adhere to a fixed savings and reform requirements. Monti had recently commented that he did not believe these conditions were too strict.

In the “Time” Draghi stressed that the ECB needed to react to the failure of the financial markets: “When fear and irrationality at the capital prevail¸ when the common financial market split again along the borders&cedi