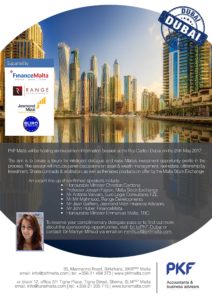 PKF Malta will be hosting an Investment Information Session at the Ritz Carlton DIFC, Dubai on Wednesday 24th May 2017.

The aim is to create a platform encouraging intelligent dialogue and exploration of foreign direct investment opportunity in Malta, but not only. With the participation of both Maltese and foreign speakers, the event will include two panel discussions, one on asset and wealth management and another on real estate and citizenship by investment. The latter will cover Malta’s European passport versus the Schengen approved ones of St Kitts & Nevis in the Caribbean. Presentations are also scheduled be delivered on Sharia Contracts and Arbitration, as well as the newest products on offer from our Malta Stock Exchange, amongst others TBC at the time of writing.

The target audience is expats based in the UAE with an interest in investing in the various segments identified, thereby gearing all efforts towards raising Malta’s profile amongst investors in the UAE while at the same time welcoming the benefits of competition and healthy debate and experience- exchange.

PKF have been frequenting Dubai / Abu Dhabi for the last four years, which has enabled us to be immersed in the very hospitable and luxury centric Emirate culture, to come and go as passive on-lookers attending various conferences and delegations, for the major part taking notes along the way. Having organized / co-organized several over-seas conferences and forums over the years, this year it was decided to add Dubai to the list.

We are honored to have received an overwhelming wave of support and encouragement from both the local sphere as well as our Dubai-based colleagues. The event will include the participation of the Minister for the Economy, Investment and Small Business, Dr Christian Cardona B.A., LL.D., LL.M., M.P as well as the Malta Stock Exchange, Jesmond Mizzi Financial Advisors Ltd, Finance Malta and Medina Asset Management, amongst others TBC at the time of writing. Our partners in Dubai comprise representatives and clients of our two PKF Dubai offices, Range Developments and Euro Legal Consultants FZE amongst others TBC at the time of writing.

Introducing the panelists in a warm up to the event, below are some excerpts from the bios of some of the participants.

The company is involved in fund management and today also offers Collective Investment Schemes under the name of Merill with its latest offering of two new sub-funds, the Merill High Income Fund and the Merill Global Equity Income Fund. It has assisted a number of companies to list their bonds or equities on the Malta Stock Exchange.

Professor Falzon is the author of several local and foreign publications and of numerous papers on the Maltese economy. He is the co-editor of “Strategic Challenges in European Banking” published by Macmillan in 1999, and the editor of “Bank Performance, Risk and Securitization”, and “Bank Stability, Sovereign Debt and Derivatives”, both published by Palgrave Macmillan in 2013.

Adv. Varvaro is a Dubai-based lawyer, legal consultant, arbitrator and mediator. He is an expert in contracts & agreements, International Commercial Arbitration, Intellectual & Industrial Property, Corporate & Company Law, Commercial & Business Law, Joint – Venture projects, Foreign Direct Investments (F.D.I.). Trusted Lawyer of the Italian Trade Agency (Trade Section of the Italian Embassy) both in the UAE and in KSA, and of the Consulate General of Italy in Dubai.

He has over 25 years of experience, providing Legal advice and assistance to a variety of clients on a wide range of projects and litigation/arbitration cases. He has extensive experience in Corporate and Commercial Law, as well as in Litigation and Arbitration, and has been employed as Legal Consultant by Governmental Organisations (Italian Trade Agency – Dubai Office) and Ministries (MFA and MED in Rome). He has extensive experience in contract drafting on major commercial projects as well as on JV projects. He is one of the main experts in the field of Intellectual and Industrial property transfer contracts and regularly provides advice on dispute resolution and dispute avoidance.

The May 2017 Dubai event is entirely self-driven and constitutes an independent initiative of PKF Malta. It is our pleasure to invite you to attend as a delegate, for which we would like to extend a free complimentary delegate pass, kindly register here.