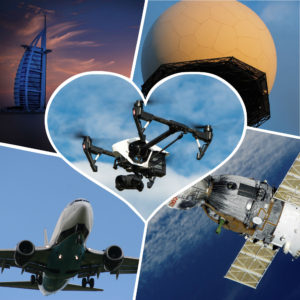 The bounds of aviation are constantly being extended to cater for the increased demands of commuters in a drive to provide more efficient ways of travelling across large distances in a shorter time. The success of these advancements lies in the synergies of the various elements composing a futuristic aviation solution.

One of the developments that are set to strongly benefit the aviation industry is the plan to replace radar-based air traffic control systems with satellite-based systems. This will offer greater information at faster speeds. A more efficient air traffic control system means that a larger number of planes can be handled by the system. Due to the increase in demand for flights the possibility of increasing the cue of planes that can land or take-off from a given airport is one of the best ways of dealing with the global demand for an added number of flights.

Satellite-based technologies use the GPS (Global Positioning System) to exchange data between all parties involved in air traffic control.  This is more efficient than radar-based systems and the benefits are manifold.  For example, it can be used to shorten routes, saving time and fuel. This in turn leads to a reduction in traffic delays permitting a greater capacity of planes in a particular air-space. Though this may sound like straining the system and leading to potential confusion, such advancements will actually lead to a higher level of security by empowering air traffic controllers to handle information at a faster speed.

Increased air traffic capacity translates into planes being able to fly closer together, serving a greater number of routes and reducing delays at airports caused by planes waiting on runways to be cleared by the air traffic controllers. Satellite-based technologies are more precise than radar-based air traffic control systems. This precision is what improves the safety standards by allowing air-traffic controllers and pilots to more exactly know the position of a plane with respect to its surrounding area and to other planes.

It is a fact that communication between all the parties involved in an air traffic control system is mainly by voice so if this is enhanced by the use of satellite-based technologies it will be possible to have superior two-way data communication. This will offer additional means of exchanging information between the parties by using technologies such as email, picture and video transfer.

Air traffic control systems are subjective to weather conditions. The ability of exchanging larger amounts of data means better awareness of the weather situation in all parts of the world and leads to an easier process of decision-making. One of the most significant improvements in a satellite-based technology is added flexibility by allowing controllers and pilots to have their own custom-made flight paths rather than having to rely on preset routes. Fast forward to the fantasy world of drones as their use is becoming more widespread.

However, now the boundaries are being pushed to include passenger transport. What up to some time ago would have sounded like the realm of dreams or coming out of a science fiction movie this is actually being planned by the Dubai Road and Transport Authority, in the United Arab Emirates. Not only, but it is all set to start implementing this ambitious plan by this summer.

These passenger drones can best be described as automated taxis that carry a passenger from one location to another by hovering over the skies like a magic Arabian carpet. The aircraft can launch and land vertically and travel at a speed of up to 50 km/h. These drones are intended for single passenger use and theoretically each passenger is allocated an aircraft drone for his or her disposal. The passenger can place any hand luggage in the booth of the drone and sits in the aircraft. The desired destination is selected from the control panel of the aircraft and, as if by magic, the machine is ready to transport the passenger to that location.

Despite the determination of Dubai’s Road and Transport Authority to make this facility a reality, this ambitious plan is not without its challenges. Firstly, although the airspace is less congested than the roads of the city, the increased use of such aircraft will place a strain on this medium. This will cause security issues since it is of the utmost importance that proper traffic control of such machines offer peace-of-mind for the prospective users. If it is felt that they are a potential hazard this will reduce their popularity. On a negative note, congestion of the airways can lead to delays which are self-defeating since the purpose of using automated drones rather than a motor vehicle is exactly to provide a speedier mode of transport. It is also feared that these aircraft work less efficiently in hot weather conditions which invariably reduce the speed at which they can travel.

Another commuting plan being developed in Dubai is called the Hyperloop. This is a single passenger shuttle tube that offers commuters the possibility of using this infrastructure on an individual basis. Being totally automated the Hyperloop permits a passenger to board an individual cabin and fly across a shuttle tube at high speed. Unlike train shuttles that depart at specific times, the Hyperloop is intended for individual use. Typically, a prospective passenger can access the infrastructure at any given time and depart at will without constraints of a fixed timetable.

Moving on we note how business jets have always been considered a faster mode of travelling long distances in a short time. However, in a drive of pushing the boundaries to new levels there is a demand for planes that travel even faster than that. A project called the Antipode is engineering a plane that can travel 12,000 miles per hour. Hypothetically, this means flying from London to New York in something like 11 minutes.

The engineering features are quite impressive, as instead of propellers the wings would be fitted with rocket boosters. The engine would be a scramjet engine which entails virtually no moving parts. Such speeds mean the aircraft would be exposed to great aerodynamic pressure, causing the surface temperature to reach highs of 980°C. The designers of this concept claim to have a solution for that by using a nozzle that can blow out air over the surface of the plane to cool its surface. The whole project is very impressive but although demand for such planes may eventually justify adequate funding for its development, actual implementation is not likely to be in the near future.

Even if the level of speeds envisioned by the Antipode project is still only a dream, providing a solution for high speed travel to the masses has been gaining momentum by investments such as the Stratajet. As with the drone and Hyperloop project, the idea is to offer a service that is normally considered exclusive and in future this will materialise only if demand justifies the cost.

The result is that booking a fast jet flight will become as easy as going through a user-interface that allows the prospective commuter to make the necessary booking to travel by a legacy airline from one destination to another. The reader may fantasize a future scenario when commuting will be as easy as Alibaba who orders his own flying carpet to whisk him and any luggage effortlessly across the skies unfettered by wardens and blinkering traffic lights.