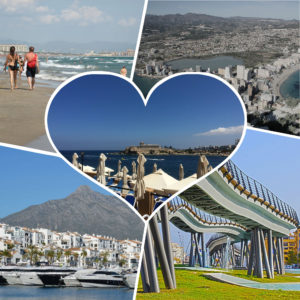 A lot of angst has been showered on the publication of a masterplan drawn by consultants picked by the Planning Authority which will be a blueprint for the redevelopment of Paceville. This was carried out by Mott MacDonald in association with Broadway Malyan and once approved it will start to be implemented next year. Embellishing this premium tourist area is a key opportunity to properly regulate this entertainment and leisure site to make way for a number of high-class architectural properties.

Paceville which is undoubtedly one of Malta’s most attractive seaside areas, has turned to be the place-to-be in order to enjoy the uniqueness of our nightlife and  tourist upmarket wellbeing.

In the past decade there has been a number of urbanistic plans developed in the Spanish coastal area. Some of these projects were made in order to increase the amount of touristic apartments and accommodation while others were focussed on the city’s development. The city of Mijas, in the Province of Malaga, can be a good example of this situation. The coast is congested and in my opinion is awfully full of houses and apartments, causing a serious harm for the environment of the area. From 1996 to 2005, 313,000 dwellings were built in the area of Malaga and its province. Another example can be found in Marbella (located in the Province of Malaga as well), where some dwellings were built in the first beach line and only after many years the Spanish court concluded that those houses are illegal, and they were all built on green areas mainly as a result of lax controls and an overzealous approach by the mayor and hints of corruption by the administration. In Alicante (near Valencia area), this last factor plus the speculation provoked an uncontrolled growth of the city which has produced a chaotic touristic plan.

It is a known fact that a real estate bubble took place in Spain during this period and that when it burst it left a number of bankrupt developers and has shaken the solvency of a number of top Spanish banks. It is to be reminded that in Spain we witnessed the cruel effect of this property bubble exacerbated by uncontrolled development, spiced by unbridled speculation and massive construction, especially in the coastal areas. It is true that while the going was good, Spain enjoyed a boom and saw these luxurious dwellings bought by locals as second residences. Really and truly in many cases the owners were foreigners. As a cause of this mad race for gentrification nobody noticed the explosion in selling and leasing prices which as can be expected were pushed out of reach of the locals.

Following the tsunami of property prices extenuated by a sudden collapse of an inefficient system one was faced with a large number of empty properties and angry estate agents looking for non-existent buyers.  Furthermore many construction companies collapsed due to the oversupply of units since they did not manage to complete the projects. However, not all the projects have ended up in a gripping gentrification maze but on the contrary some cities have improved, enhancing the residents’ quality of life and providing a better impression of the social environment. For instance, in the city of Malaga, an important urban project took place just a few years ago. They tried to connect the harbour area with the rest of the city centre, so they had built an elevated platform consisting of a seaside promenade, where different business have cropped up and, eventually, a new cultural centre emerged. This project meant a new recreation area for the neighbouring town dwellers as well as for the tourists.

In some cases, as in Altea (a city near Valencia), the urbanistic projects are not only focussed on the tourism and on the recreational buildings but also on the necessities of the city. A renewal plan was made in order to unify all the waterfront and to improve the water stream because there were some zones with stagnant water.

Both mentioned cities share the feature of a coastal area geared to pedestrians, where traffic is limited or forbidden except for the residents, encouraging the public transport simultaneously. Furthermore, more job vacancies were created as a result of new business opportunities. Finally, due to improved design in spatial quarters this has reduced pollution and the noise traffic.

Focusing on Paceville, after assessing the MacDonald’s masterplan one can classify it into four main phases. During the initial phase, a waterfront will be built along the coastline, from the Corinthia hotel area to Portomaso. This step will face some opposition from certain sectors especially concerning agreements with the landlords. Both parts will have to reach a compromise in order to pursue the plan and not to harm the owners’ interests.

Phase 1 is mainly based on the street parking elimination in some areas and on the establishment of restrictions in the rest of Paceville, in order to avoid the current overcrowding and improve the width of the streets. More parking areas for residents will be built. Thus, Paceville will have more open areas, wider streets and clearer pathways. In this phase the sidewalks will be improved and renewed, in my opinion one of the most needful features.

During Phase 2 a tunnel will be built to reduce traffic congestion, specifically by its entrance and exit. Also a pilot cycle corridor will be created to encourage the usage of more ecological means of transport instead of using cars.

Finally, the last phase will cover the bus loop construction. Therewith, the introduction of cycle and pedestrians facilities hopefully will lead to a greater use of public transport rather than the private one.

One of the main protests coming from the residents is that rents and property prices will rise up, forcing them to leave Paceville (gentrification phenomenon). It is highly likely that this could happen: the dwellings located in good and nice areas are always revalued. This is not meant to only be a threat, but it can be also a good opportunity for those who have intention to sell their properties. However, it is very important for the Maltese Government to establish rules in order to avoid the real estate speculation, and protecting the interest of the tenants who are not tourists.

Considering all the data presented about this project, I would agree on the fact that Paceville masterplan is a great opportunity for the development of Paceville for a number of reasons. First of all, the creation of the waterfront is an important step for the improvement of Paceville. Nowadays the coastal access is limited in many cases, since some seaside areas are privatized or the access is too dangerous. This situation can be considered unfair for the local people, because not all citizens are able to enjoy the beauty of the seaside. Since the coastline and the seaside have a great appeal, it is quite difficult to understand why its access is limited. Currently, in some areas where the access is possible the promenade is degraded and untapped, whilst its potential could be great.

Another significant change is the revamp of the sidewalks. Walking around convoluted streets of Paceville is not comfortable, especially when it is dark. Most of the sidewalks, if they exist, are too narrow and in many cases they are used to park the cars. After the embellishments are put in place it will be easy to enjoy walking through Paceville streets, especially for those with reduced mobility or disabled. Moreover, this change will create a better first impression of the area for visitors and it will improve the residents’ quality of life. In addition, the project will provide a secondary draining system in order to avoid floods during the rainy periods. Finally, it is exciting to notice the proposed additional bus stops and a novel new maritime transport system connecting the bays improving access in a faster way.

In conclusion, despite the project has fostered a negative dialogue with the population and other NGO’s, I presume that everyone agrees on the fact that the environs at Paceville urgently needs a boost.

Certainly, it is important to control Gentrification and to ensure that the Government will properly regulate all the processes, taking care of the citizens’ concerns, and following the MacDonald recommendations by providing and increasing the utility of public services in the area. To learn the lesson from Spain one should never abandon residents to be hostage to the private interests of the speculators.