One can notice that HSBC has taken good care of its shareholders since the start of the recession. 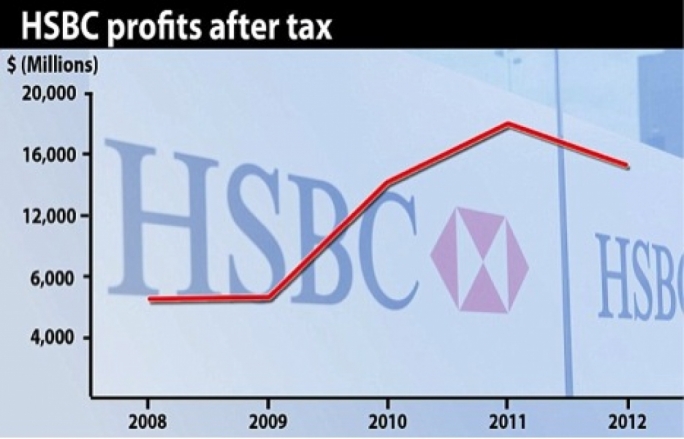 It is not fair to state that the third largest global bank has lost its Midas touch, perhaps one may concede that recently it has not yielded the same high rate of profits but certainly HSBC is a shining example of a disciplined management team that is rather careful to exploit commercial opportunities to the full.

HSBC said its profits rose 4.0 per cent in the first quarter as investment banking revenues bounced back after a weak end to last year, to offset a rise in compliance and regulation costs. It proudly reported a pretax profit of £5 billion for the first three months of this year, up from £4.5 billion a year ago and well above the average forecast from analysts polled by the company. Taken in perspective, one can notice that HSBC has taken good care of its shareholders since the start of the recession, when in fact, its pre-tax profits are a testament to its Midas touch as can be seen here:- 2007: $24bn;  2008: $9.3bn; 2009: $7.1bn; 2010: $19bn; 2011: $22bn; 2012: $20.6bn.

Perhaps the fly in the ointment is the higher cost of regulation, combined with expensive fines paid both in Europe and America for certain banking transgressions (it had to pay a $4bn fine  for trading with Mexican drug cartels, and other anti-money laundering faults) and perhaps due to stiffer regulation it saw its underlying operating costs rise, partly due to an increase in engagement of better qualified compliance staff.

A recent scandal has hit the global bank in Argentina, where authorities are investigating a possibly deliberate fire in which documents from major financial institutions were lost – documents that contain information about economic fraud committed in the country.

A police analysis determined that the fire that burnt down two warehouses belonging to the Iron Mountain company in Buenos Aires in 2014 was intentional, leading to suspicions about  a conspiracy between Iron Mountain and its major clients – such as banks HSBC, BNP Paribas and JP Morgan – to destroy documentation involving economic crimes, by causing a fire in the company’s warehouses as the head of Economic Development of the City, former HSBC executive Francisco Cabrera, intervened in order to give the company these tax benefits.

It turns out that HSBC was the most affected company in the fire, and it is one of Iron Mountain’s biggest clients globally. With such a global reach it does not surprise anyone that HSBC starts counting pennies when faced with lower profits, so staff start to feel the sharp edge of the axe.

One reads in the media how three years ago it did axe 4,000 jobs in Britain and switch them to India, Malaysia and China – losing 1,400 call centre jobs while the rest of the sackings hit the administration pool. But with so much pressure to maintain profits and with higher regulatory costs in Britain, HSBC took a decisive step to relocate to low cost domiciles. Observers in UK note how with the start of recession this is a trend common in industry, with firms in the finance, airline and phone directory sectors shifting administrative and call centre jobs to Asia.

Nobody batted an eyelid when three years ago the news came out that HSBC decided to close all its processing and administration sites at four main centres in UK. Recently in the advent of stiffer regulation against mis-selling of financial products, HSBC slashed 500 financial advisers as it proved unprofitable to sell investments to over the counter customers who are not prepared to pay fees up front for advice.

It goes without saying that such layoffs hit the Union chiefs in a negative way such that when announced in the tabloids a UNIFI official, Rob O’Neill, said: “The gloves are off. It’s profit before people.” Protesting against the cuts and in particular to the constant shifting of jobs to low cost domiciles (wages are up to a third lower and staff are educated to university level) has irked staff unions.

It is natural for unions to claim HSBC is purely profit-motivated and does not balance the interests of staff, communities or consumers in the UK with an unbridled drive to earn more for its shareholders. As can be expected union officials protest against shifting of jobs, saying this conjures the spectre of banks caring exclusively for stakeholders and forgetting pledges on corporate social responsibility.

Only recently, due to fragile growth prospects, HSBC will slash 14,000 more jobs worldwide to save an extra US$2-to-US$3 billion in costs by 2016 as chief executive Stuart Gulliver argued the cuts would keep the ratio of costs-to-revenue near 55 per cent. To sugar the pill, it is common to sweeten the jargon when announcing layoffs:- management now uses the term downsizing,  alternatively with Barclays finance chief Chris Lucas using the term ‘rightsizing’ to describe its plan to slash 3,700 jobs.

Equally unpopular was Brian Robertson, the boss of HSBC’s retail bank, when referring to cuts, he nonchalantly remarked that ‘change is always unsettling’.

Certainly, HSBC is not the only bank to tighten its belt since prospects for jobs and pay at Bank of America, Citigroup, Goldman Sachs, JPMorgan and Morgan Stanley are not rosy but readers may ask why are negotiations over the renewal of a collective agreement in Malta taking so long to be signed with the union, arguing that HSBC is not responding to its request for mediation after a long-drawn out industrial dispute.

This strike was curtailed following an offer for the intervention of the Prime Minister’s Office. The union had previously launched a full-blown strike after HSBC Malta threatened a lock-out against employees obeying directives for a communications ban and sit-in last month, on the other hand both sides are still on the warpath, sharpening their knives since management allegedly reneged on a collective agreement discussed in August 2014.

Without any doubt, HSBC’s decision to threaten a lock-out against those employees obeying the directive led the union to issue a full-blown strike, completely removing the possibility of other milder directives. It is a dilemma, as the management is digging its heels in, saying it found no justification to agree on an increase in the minima of the salary ranges; unilaterally awarded only a minimal increase in salary and complained of “frenetic bank practices and work overload”. Surely, for industrial peace to prevail it is equitable for employees to receive a fair share of the fruits of their collective effort which over the years have consistently yielded bumper profits to shareholders.

Can it be true that HSBC decided to unilaterally renege on a collective agreement negotiated earlier last year? Why are talks so protracted when earlier this year strike action by a majority of the bank employees was thwarted after an intervention of a top civil servant at the highest political level and what is hindering the bank to respond to the union’s request for mediation following another offer by the Prime Minister Office?

These questions do underpin a sensitive side to the dispute that has festered for too long, making one question why the union is finding fault with the management’s delaying tactics, saying this continuously frustrates the loyal workforce and clearly goes against any effort to make HSBC the best place to work.

One hopes that the dispute is quickly resolved so as to put employees’ mind at rest that their job is secure even though it appears that the bank is under instructions to resist increasing salaries. It is true that last year HSBC Malta’s profits were down 40 percent on bumper profits earned previously… but surely the management at HSBC Malta can look forward to recoup lost profits, given the good prospects that the island has been blessed by a prognosis for growth forecast by international rating agencies. Let us all pray for the return of that illusive Midas touch.