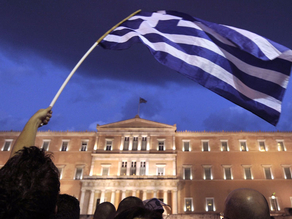 The 2012 budget has passed in parliament with an overwhelming majority of 258 votes for and 41 against¸ backed by the three parties namely the  former ruling party PASOK¸ main opposition New Democracy (ND) and the smaller Popular Orthodox Rally (LAOS) party.  This austerity budget encompasses further cutbacks in state spending and predicts a primary surplus of 1.1% of GDP.

Addressing a 300 member parliament on Tuesday ahead of the budget¸ transitional Prime Minister Lucas Papademos referred to the 2012 budget as a step towards exit from the crisis¸ consolidation of Greece’s place in Europe and the creation of conditions for sustainable development emphasizing the fact that it “will not be easy¸ and anyone who promises that is not providing services of national responsibility”.  He reiterated that “the economic crisis in our country is not a storm that will soon pass. It will have duration because it is the outcome of imbalances that have been aggravated over the years¸ it is the result of solutions that were postponed or that were never applied because it was considered that they would have a short-term political cost and despite the long-term benefit for the economy and society. This is why dealing with the consequences of mistakes and omissions will take time and will have a cost”.

He explained that the budget “sets out ambitious but feasible targets and the macroeconomic conditions on which the budget is founded are reasonable and in line with the predications of all the international organisations”.

The first imperative phase of the budget is the projection for a primary surplus next year¸ with the aim of reducing the debt by 42 billion euros. “Achievement of this target¸ from 2011 to 2012¸ will require improvement of the primary surplus of the General Government by 6.8 billion euros¸ while in the two previous years¸ from 2009 to 2011¸ the accrued fiscal adjustment was approximately 20 billion euros”¸ Papademos explained.

He added that this primary surplus would be raised from an increase in tax revenues and the change in income tax¸ from contained state expenditures and a clamp down on tax evasion.
Greece has also agreed plans to accelerate reforms and privatisation programmes¸ as well as to introduce further cuts in public sector pensions and jobs.

On a positive  note the Prime Minister highlighted significant positive indications that would support recovery forecasts namely an increase in exports and improved performance of export-oriented companies¸ a stop to both increases in tax rates and salary/pensions reductions which would result in an improvement of employment numbers and investment climate.

Finally the Prime Minister appealed for “substantial unity in the effort¸ which we must all make together”¸ adding that “we do not have the luxury of grumbling or continuing with mutual accusations over the past¸ on who is to blame. Posterity will not forgive us if we abandon the battle for the future due to scuffling over the past. In essence¸ we are not under the monitorship of the troika¸ but of history itself”.

He concluded “Greece is and will remain a member of the united Europe and the eurozone¸ and we will not thoughtlessly lose this biggest post-war national achievement. But participation in the euro entails rules and obligations that we must meet with consistency¸ in order to enjoy the advantages of a global currency and be able to invoke European solidarity&c