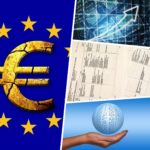 The mood on the first working day of the year is optimistic with the news of record cash donated to Dar il-Providenza and a general feeling of wellbeing given there were no major accidents over the holiday season.

Financial markets in America also closed bullish as the third quarter results blew the roof off.  Earnings per share for the S&P 500 were 23% above the last peak before the start of recession in 2007.  The S&P 500 rose at an average annual pace of 16% since the election of President Trump.  There is a stock market boom with global growth and a drive to invest in higher technology such as AI.

The recent passing of the US tax bill will boost corporate profits and somewhat reduce personal taxation whereas the climate is set for new corporate investment – there is hope that the trickle-down effect starts working. The median household income has started to move upwards albeit slowly having grown 3.2% in 2016 after adjusting for inflation. So what is happening in European economies now beset with Brexit talks and the slow recovery of the Euro currency?

It looks like the hawks are calling for a harsher fight against tax evasion and fiscal transparency following the launch of Panama and Paradise papers.  Quoting a rapporteur, Petr Jezek, he believed that Malta, which was mentioned several times throughout the PANA debate, was not a tax haven but in his opinion it was not cooperative in the fight against tax evasion and avoidance. Malta complied by fully introducing the latest Anti Money laundering rules invoking a public UBO register on companies, trusts, foundations and agencies to start this year.

It was on 15 January 2016 that the Commission published a Call for the setting up of the Platform for Tax Good Governance.  Its main arsenal now is locked into energizing the Common Consolidated Corporate Tax (CCCTB), which was previously launched in 2006 but was temporary put on hold partly due to the global recession.  Some may question the reason why CCCTB was taken out of mothballs and why there is now a strong drive to kick start it.  The answer may be partly due to tax scandals in Europe culminating with the revelation of low tax paid by banks particularly in UK.  Under the proposed CCCTB, multinationals will compute their EU wide consolidated profits which will be then allocated to Member States on the basis of an apportionment formula. This formula will take into account three factors: payroll, sales and assets excluding intellectual property.  As soon as the tax base will be split among those criteria, Member States will then tax the allocated profits at their own rate. This formula discriminates against smaller states and in fact CCCTB is strongly opposed by Cyprus, Malta, Ireland and Luxembourg.

Recently, the revelation that banks are notorious for avoiding corporate tax has brewed more resentment such that the investment and corporate banks operating in London reported figures showing they only paid a combined £21 million in corporation tax in 2014. Between them the banks generated revenues of Stg15.6 billion in the UK, profits of £3.6 billion and employed 33,000 staff. It is unbelievable to read that five of the world largest banks i.e. JP Morgan, Bank of America Merrill Lynch, Deutsche Bank AG, Nomura Holding and Morgan Stanley – said their main UK arms paid no corporation tax.

Strange but true that Goldman Sachs and UBS AG, used tax breaks and tax losses generated during the banking crisis to reduce their tax bills, while Goldman Sachs Group UK Ltd, said it made £1.34 billion profit in Britain in 2014 and paid a cool £17.9 million in corporation tax. Stoically tax advisers said the low tax bill for banks partly reflected “timing differences” around payment of shares awarded to staff.  It comes as no surprise that the Commission is now faced with the pressure to harmonize taxation within the European Union.   The struggle comes at a time after a major recession affecting Europe, especially countries like Greece, Portugal, Spain, Ireland and Italy.

This ongoing crisis exposed a number of fundamental problems and revealed certain weaknesses in the European scheme.  The huge competition incites legislators to reduce the progressiveness of their tax schemes leading to an imbalance amongst nations and the creation of tax havens.  In theory, this results in an erosion of the tax base and in an increase in inequalities within Europe.  A solution to this lack of cohesion could be a common European approach advocated by the Europe 2020 strategy but it won’t be easy to put in place this harmonization policy since as far as taxation is concerned, all decisions concerning the passing of new legislation are generally taken unanimously.  Recently this took a different twist and a solution was echoed by the Commissioner Pierre Moscovici who agreed to move from unanimous voting to absolute majority within the Council.

The single European Act poses the principle of tax neutrality in intra-community trade but taxation could hinder this principle.  Nonetheless there is a lack of harmonization concerning the functioning of VAT grouping in the Member States. There are differences in each Member State’s national law concerning the conditions of application of the implementation of VAT grouping.

A solution to harmonize VAT grouping in the EU and therefore to enhance the EU tax system may be the introduction of cross-border VAT grouping.  As yet only two Member States allow cross-border VAT groups namely the United Kingdom and the Netherlands but it’s far from being established in Europe.  Cross-border VAT grouping would improve the Internal Market by lifting barriers between Member States as recommended by the principle of freedom of establishment of the EU Treaty. Nonetheless the current tax competition dilemma is highlighted by the attractive corporate taxation of Ireland (12.5% rate of corporation tax) which is also mirrored by Cyprus which taxes at a similar rate.  Larger European governments don’t agree with this ‘fiscal dumping’ and are in favour of a harmonization of the corporation tax.

This measure aims to simplify European taxation which is not efficient since the current system of corporate income taxation is based on separate accounting.  In fact, European companies must face 28 different national schemes to establish their taxable income.  Moreover, multinational firms tend to place their profit in low taxable countries which causes disputes among governments.  In conclusion, Malta’s economy and particularly its thriving financial services sector will suffer a big blow should the EU get its way on the introduction of CCCTB according to new study compiled by senior economists for UK-based NGO Tax Justice Network.

The findings show that Malta will see its income from tax arrangements deriving from subsidiaries of multinationals registered here decline by more than half, and in some cases even slashed by two thirds.  Certainly there exists a challenge to the survival of our financial services sector which one hopes there will be a bi-partisan approach to fight it at the next ECOFIN meeting.