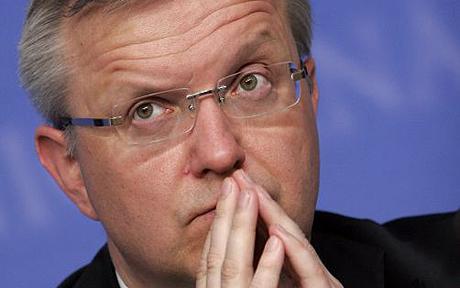 According to the report Rehn said that “recent developments represent a good basis on which to build a more ambitious reform program¸ which is necessary to push growth and reduce vulnerability “of the national economy.  Rehn added that “Today’s discussions in the Eurogroup focused both on creating stronger financial firewalls and building a stability union. There is no single “silver bullet” that will get us out of the crisis. Instead¸ we need to work on all fronts. The decisions of the Eurozone Summit of 26-27 October do precisely that and they must be fully implemented.”

Italy had maintained a more prudent fiscal stance during the crisis but remains “vulnerable to a loss of investor’s confidence¸ mainly because of its failure to introduce much needed ambitious fiscal and structural reforms in the past decade”.

With regards to additional measures¸ the report says “countermeasures must be created to preserve the fiscal targets announced by the consequences of weaker growth expected in Italy and elsewhere. Achieving the deficit target for 2012 at 1¸ 6% of GDP – as still read in the paper – is an essential step toward a balanced budget in 2013.”
Rehn stressed the need for countermeasures saying that they “should be constructed in advance of the structural budget reforms”. These reforms include: a reduction in the cost of pensions¸ a tax shift from labor to consumption and property and a strengthened structure to fight tax evasion by “drastically lowering the threshold for electronic payments¸ increasing reliance on indirect indicators of undeclared income¸ and improving the cooperation between different levels of government on tax administration issues”.  The report notes that the tax burden in Italy is sky high and not fairly distributed¸ mainly due to tax evasion.  By introducing these reforms “the relative weight of transaction versus recurrent real estate taxation should be reviewed in favour of the latter¸ and real estate cadastre values should be updated.”  He added that steps are necessary “to secure the announced deficit targets while raising the equity and efficiency of fiscal policy”.

The Commission’s report proposed a review of the legislation for permanent contracts in order to “harmonize the rules for layoffs” and also suggests a re-assessment of the procedures for collective redundancies with the aim of simplifying them and improving the efficiency of the labor market.

Considering the crisis in the Eurozone¸ the implementation of reforms that make Italy’s fiscal policy more growth-friendly has become increasingly urgent to help kick start the country’s growth potential.
The report concludes by emphasizing Italy’s need to rise rapidly to the level of the  challenges it faces noting that Prime Minister Mario Monti’s new government “has the know-how to design a comprehensive and coherent reform package that can kick-start growth and restore confidence”. In turn Prime Minister Monti made it clear that his government will take the necessary measures to a