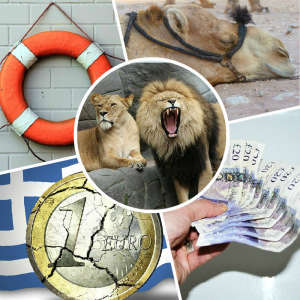 If money alone cannot solve the problem then it is inevitable for the Greeks to exit the euro.

The past few days have seen the Greek prime minister George Papandreou excel in his brinkmanship when faced with the severe dissent of his electorate. When the third bailout plan was still on the table after marathon talks at Brussels on 27 October¸ Papandreou dropped a clanger by asking for a referendum before signing. This was the straw that broke the camel’s back. The markets collapsed¸ knowing quite well that the Greek will never accept the bailout conditions and will certainly pave the way for an exit from euro.

This would have been the third deal to save the Greek solvency problem. In brief¸ it proposes the banks to suffer a 50% haircut of loans¸ the increase of the EFSF rescue fund to €1 trillion and a serious move to recapitalise banks. Many doubted the effectiveness of the rescue plan. Economists labelled it as patchy and without validity. It was devoid of the necessary details and confusing¸ while it looks more like a ploy to calm the markets… which it failed to do in the medium term.

All this comes from a drop in market sentiment¸ and of course mirrors the imbalances in countries’ budgets. Deficits have been plaguing the economies of the eurozone since the onset of the global recession in 2008. Euro-sceptics have expressed their fears for the leitmotif of the single currency. Certainly¸ the British are not crying for the resurrection of the currency brandishing a large ‘E’ with two slashes in the middle on a blue background surrounded with gold stars.

And misery is what has been the harbinger coming out of latest news on beleaguered workers in Greece¸ Portugal and Ireland. These face job losses and unprecedented austerity measures. Naturally¸ such bad news has percolated in the foreign currency scene¸ with the euro weakened to a six-month low against the yen after Moody’s Investors Service reduced Ireland¸ Spain and now Italy’s sovereign debt rating¸ adding to concern the European debt crisis is deepening. Irish bonds dropped following the downgrade¸ which came after European finance ministers failed to present a solution to the contagion that’s threatening to spread to the Pasta and Pizza country (Italy under Berlusconi) and the other Club Med members.

It is no exaggeration to state that Ireland’s downgrade will make it “more difficult” for St Patrick’s islanders to return to a surplus anytime soon. Moody asserted that while Ireland has shown a strong commitment to fiscal consolidation and has¸ to date¸ delivered on the terms of its bailout¸ there are fears that lat