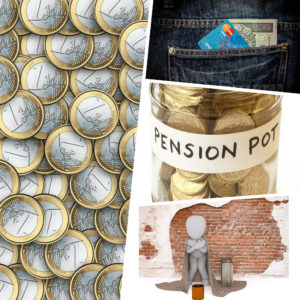 Achieving an equitable formula to augment minimum wage has been the battle cry of all political parties – it is no surprise this achievement will feature as a rally banner in political campaigns now so close to election date. But can we afford to be generous and upset the concertina of wages thereby reducing our competitive edge in a country which is confronted with paying a high salary bill due to a bloated bureaucracy (now exceeding 45,000 staffers).

Yet it is not easy to appease the appetite of protestors who have been banging at the doors of MCESD to tackle poverty by increasing welfare handouts and pushing employers to dole out more in wages to meet the exigencies of the so-called Sans Culottes, or the under-privileged. Economists tell us that a wage policy aimed at a fairer distribution of the wealth is paramount, more so now that both the government and credit ratings agencies are telling us that GDP growth has been racing ahead.

Bare facts show that on average 4,000 currently receive the minimum wage, which is €736 a month, and this makes them sail close to the edge of poverty. Quoting Philip von Brockdorff, Head of the Department of Economics at the University of Malta, he argues that “the average wage increase doesn’t give the whole picture, as there are sectors where wages are relatively low and which have remained relatively low”.

In his view, any increase in the average wage is heavily influenced by wage increases in the professional and technical categories.  In the case of low skilled workers, wages have “virtually remained unchanged”.

Having said this one cannot underestimate the rule in any democracy that reducing poverty is a socially and morally desirable policy. Naturally splurging largesse cannot be an affordable option once the country is saddled with an over 6 billion euro debt (net of selling most of the family silver – some at fire sale prices) notwithstanding that it is important that not only a fair distribution of wealth is carried out but this can be seen to be carried out.

The trickle-down effect is not functioning.  Caritas proved beyond doubt that there is scientific evidence of growing poverty – both the relative and absolute type. This problem needs to be tackled without political bias unless we risk having it foment social unrest. Maybe this is what prompted the Prime Minister to urge the social partners to get together and formulate a fair increase while all social partners were expected to compromise on some of their demands.

Readers may ask is the mantra of poverty a myth or is it reality?  The man in the street will tell you poverty is a perception because TV announcements regularly broadcast a galloping economy firing on all cylinders with a healthy tourist industry, a vibrant iGaming sector and financial services industry all leading to record low unemployment levels.

This all sounds hunky dory. Yet, the sound bite from the Opposition is that the gap between those making good money and people at the bottom is growing and they challenge the government on the true effectiveness of the feel-good factor.  Can we sit down and take a more holistic approach to the incidence of poverty now that we witness early signs of healthy growth in our economic garden.  It is true that we have not struck oil (we stopped exploration five years ago) and there is no windfall to share so we need to be feet on the ground before the budget master can splurge goodies.

Let us visit a number of key indicators that reveal how not everything is rosy in our garden. Starting with the high incidence of early school leavers who gain no formal education and yet are expected to earn a decent wage when nowadays even more than ever this is becoming difficult since employers demand a higher technical qualification and increased digital competency.

Another worrying factor is the low female worker participation and an acute skill mismatch in certain sectors. Only 25 percent of iGaming employees are locals.  Regardless of political sweeteners, NGOs complain that the minimum wage is too low to sustain a breadwinner (unless he/she does three jobs on the hop).  Others sustain that if the minimum wage goes even slightly up then sectors making heavy use of low skilled workers will suffer reduced profits and may start shedding workers.

In a nutshell, this document says poverty is on the decrease. Most of the workers who earn the official minimum wage, or close to that, can be found in their thousands working in the distribution, hospitality, construction and catering sectors.  Can we solve this Catch 22 situation by defining the true value for a Living wage which theoretically equates all the exigencies of different household types.

Ramming the point home, Fr Vincent Magri from the Paulo Freire Institute said this claim for a higher wage should not be seen as charity and opines that “What we are calling for is justice, which enables people to live in dignity”. Employers reply that we cannot ignore the plight of export industries barely surviving with marginal profit ratios competing with Ex-Communist countries in Europe with lower wage costs.

With this in mind we are pleased to hear that MCESD has recently concluded discussions and announced it reached a unanimous agreement towards a wage increase. This award is staggered over three years amounting to €8 per week.  Minimum wage earners who have completed the first year of employment will be entitled to a mandatory €3 per week increase in second year and another €3 per week in the third year. The increase, over and above the cost of living adjustment, will equate to more than €400 per year in two years’ time.

Critics of the agreement say what has been agreed is only half of what social campaigners led by Caritas have been asking for but Social Dialogue Minister Helena Dalli disagrees, saying the agreement would unfreeze the minimum wage, which has remained the same for 27 years. It is a historical coincidence that so close to election date the pact will be signed by the social partners, the government and the Opposition.

The pact states that employers and unions cannot be expected to carry the burden of resolving poverty through industrial relations and collective bargaining structures.  Nor is the labour market mechanism on its own expected to address poverty.  Quoting Joe Farrugia, CEO of the Employers Association, he said that one of the major achievements of this pact was to bring government and Opposition together, as they both realised they were playing a dangerous game. In his words – treating the issue as a game of poker and calling each other’s bluff would have resulted in all parties ending up on the losing side. Be that as it may, Caritas disagrees, saying the pact is a watered-down version of the seven per cent cost of living increase that workers were claiming. In the metaphor of a poker game workers did not win the bet having lost the opportunity to secure a Royal Flush. Perhaps they can shuffle the cards again next month once the electioneering hubris subsides and a winner is announced as the incumbent in Castille.