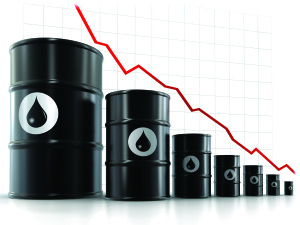 The oil sector is going through a deep crisis, which is difficult to forecast the end. The oil is an engine of modern economy, its price has the power to bring down or to make grow the economy of all developed countries.

The main reason was the oversupply of oil, which has led to a price war in oil sector and the weak demand. Behind a price war there is always an objective to destroy. According to the analysis, Saudi Arabia started to reduce the oil price for the exit from the market of its competitors, in fact the oil cartel OPEC is determined not to cut production as a way to hold up prices. First of all the aim was to hit US producers, because in the last few years United States imported less oil thanks to the revolution of shale oil. However the extraction of shale oil is very expensive. If the cost of an oil barrel drops below $70, the extraction becomes not convenient and unprofitable. In fact many energy companies in United States have left the extraction of shale oil.

Another competitor to hit is Russia. The Russian economy depends on energy revenues, with oil and gas accounting for 70% of export incomes. Moreover oil and gas make up over 30% of the country’s gross domestic product. The World Bank at the beginning of this year has alerted that Russia’s economy would shrink by at least 0.7% if oil prices do not recover. On the other side Russia does not want to cut its production. According to Energy Minister Alexander Novak, if Russia cuts its production, the importer countries will increase their production and this could mean a loss of Russia`s market niche. The collapse of oil prices is a difficult problem to manage for an economy already weak like Russian one, the Russia`s scenario became more critical for sanctions for war in Ukraine. However last news from Kremlin are good: Putin, at the Economic Forum in St. Petersburg last June, 2015 said that the economic situation now is better and the country’s budget is stable.

Certainly oil production will not decrease in the coming months, on the contrary it will increase after the nuclear deal with Iran, strongly supported by Obama. The end of the embargo in Iran will change drastically the scenario in the oil sector. Now Iran is a strong competitor in the oil market and Tehran has announced plans to increase the export of 500,000 barrels a day, in the next six months.

On the demand side of oil, the news are not good. The crisis in China has led to a decrease in oil demand.

Moreover European economies are still weak and the European countries (fortunately) are more efficient in terms of energy, also for these reason they import less oil.

The real winners of the fall in prices will, however, the economies most dependent on the agricultural sector, such as India, which contains a third of the world population. Agriculture is a sector with more intensive use of electricity compared to manufacturing sectors. The countries based on agriculture, generally poor, have many benefit from the strong downward trend.

Other winners of this game prices seem to be consumers. In many importing countries, they have benefits in the cost of utility bills and petrol. Unfortunately, in some countries, the price remains high because of the tax burden on petrol.