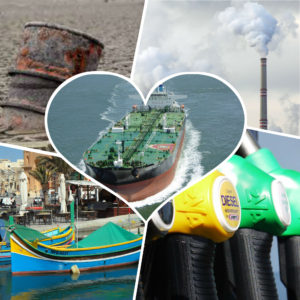 LNG is a fuel, and, when it becomes a gas and mixes with air, it will burn. This article tries to explain in non-technical terms the advantages of using LNG by way of cost savings, cleaner air and tries to demystify the myth about the dangers of transporting LNG in tangerine coloured carriers.

Last year, an enthusiastic MEP representing the Nationalist opposition dutifully submitted a petition calling on the European Commission to investigate the risk to public safety from a floating LNG storage unit berthed close to shore.  This was fired from an altruistic desire to protect residents in the vicinity of Delimara – where an old power station running on heavy fuel oil is located.  This plant has in the past twenty years been running at a loss such that both residents and industry were subsidising its inefficiencies through paying the highest tariffs in Europe.

Two years ago the Labour government reduced tariffs across the board by 25% in anticipation of lower costs associated with a new gas-fuelled power station.  This was promised to be ready within two years but for a number of reasons it was delayed and took longer to materialise but it is now ready – some experts within the opposition have shown concern over the liquefied natural gas storage facility on board a carrier planned to be berthed inside Marsaxlokk Bay.

They claim that no marine impact and risk assessments were published by ElectroGas – the investors. The opposition has been lobbying against the use of gas for electricity generation saying in its opinion using the existing oil fired plant (minus the decrepit Marsa power plant) plus the submarine electricity cable to Sicily is the perfect mix to reduce tariffs. They refuse to accept the necessity of an investment in a modern gas fired plant financed entirely by a Siemens led consortium. They say this was superfluous. A major bone of contention is the storage of gas. As building storage tanks on land will be an eyesore the alternative of seaborne storage in turn irritates residents once they are stoked with perceived fears of explosions and collisions at sea due to accidents arising during inclement weather. A government spokesman rebutted the scaremongering saying that there is no danger as all technical studies show that LNG tankers are safe and as a result of the massive private investment residents will be spared the dense fumes belching out of the present oil burning plant (unless fully captured by scrubbers). Really and truly the preachers of another Armageddon are saying danger is knocking on our doors due to the berthing of LNG carrier supplying a new power station which is soon to commence operation.

At present the controversial BWSC plant (procured after consulting Yellow pages) housed in an ageing Delimara utility is run by burning heavy fuel oil supplied through onshore storage in huge tanks (it is now being converted to run on gas). One reminisces with some sobriety, that a few decades ago Enemalta was offered a free gas pipe line that was passing through Maltese waters connecting Libya and Italy. The opposition mysteriously chose not to accept the offer and consequently Enemalta proceeded to buy crude oil thus facing the vagaries of international prices.

Four years ago, there was a scoop by a local paper that discovered millions paid in kickbacks by the procurement commitment to a rogue oil broker. At this juncture, I must declare that I have no brief from any quarters to demystify the dangers associated with LNG carriers and I am basing my arguments based on research on the subject.

Readers may disagree with me. I have no axe to grind even though I have been accused by a prominent local astrophysicist that I am simply parroting Muscat sound bites. To start with, one may ask why use LNG and not other fossil fuels?  The advantages of switching to gas is amply evident when reading research by the JRC Institute for Energy (IE) as it examines the benefits and drawbacks of the EU’s greater use of LNG shipments.

Experts tell us that natural gas is the cleanest burning fossil fuel because the combustion process for natural gas is almost perfect with very few byproducts emitted into the atmosphere as pollutants. Also, with the introduction of new technologies, nitrogen oxide, a pollutant as defined by the Clean Air Act can be significantly reduced. LNG is a liquid that won’t burn until it becomes a vapour, and this won’t burn until it mixes.  Obviously transporting LNG by sea as opposed to pipelines has the added advantage of eliminating huge and ugly looking storage tanks directly eliminating the threat of corrosion in tanks, leakages in the ground with resultant soil contamination and costly environmental clean-up.

In our case at Marsaxlokk, an opposition spokesperson warned that to erect storage tanks next to the power station these will have to be of enormous size (circa 60,000 cubic metres) estimated to reach the size of two Mosta domes. These tanks will clutter the pristine landscape of Marsaxlokk’s natural harbour. Critics of LNG tell us it is a good substitute as an energy source to other fossil fuel but it is not a perfect solution omitting to mention that it offers significantly lower emissions of sulfur, nitrogen oxide and particulate matter compared to conventional fuels.  It is important to note that toxic emissions of carbon dioxide are also lower.

In order to facilitate transport, natural gas is cooled down to approximately −163°C (−261°F) at atmospheric pressure, at which point the gas condenses to a liquid.  The tanks on board an LNG carrier effectively function as giant thermoses to keep the liquid gas cold during storage. Most ships have two hulls, in effect a double ship that protects the cargo in the event of a collision, grounding, or a terrorist act. The ships are inspected during construction or in our case during conversion and are periodically inspected.  International rules cover just about every safety feature of these ships, as well as crew training standards.

Everyone involved in liquefied natural gas transportation takes safety very seriously. There are many lives and a great deal of money at stake. This vigilance has resulted in an outstanding safety record. Over the last 30 years, there have been about 33,000 LNG voyages worldwide, and on none of these has there been a significant LNG spill.  Notwithstanding, the infrastructure for processing LNG, in certain ports however, is still inadequate.  It will take time and require significant investments to increase the percentage of European ports that can berth huge supply vessels with LNG. As stated earlier, since the start of sea transportation during the last three decades only minor incidents have occurred where LNG was accidentally released into the atmosphere.

The opposition spokesperson says that accidents do happen and residents at Delimara are worried stiff about the consequences of such an occurrence. The truth is that Delimara has for many years been designated as an industrial area and as the unique site chosen in 1990 to house a massive utility plant the latter needed to be supplied by fuel stored in huge tanks adjacent to the site. The older Marsa plant was originally run on coal. No fuel or petroleum product is completely safe: not coal, oil or liquefied natural gas, all of which are carried on ships.

LNG is a fuel, and, when it becomes a gas and mixes with air, it will burn. One can never consider anything that burns completely safe, even fairly innocuous materials like wood and cooking oil. But some are worse than others and liquefied natural gas is far from the worst. Experts inform us that when LNG vapour reaches an open flame, it easily catches fire and will burn everything within the vapour-air mixture; the same as when natural gas burns.

One concludes that the ElectroGas will in due course publish the safety and risk assessments to pacify the doomsayers and one augurs that the residents of the south will continue to reap health benefits of a cleaner air (minus the phallic chimney at Delimara) and we all enjoy cheaper tariffs.