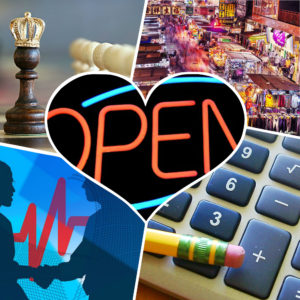 “Open All Hours” reminds us of a popular TV series written for the BBC about Arkwright, a hardworking British shop owner, lovingly played by the late Ronnie Barker in a comedy – a unique anthropological series.

Perhaps this epitomises the cliche that Britain is an island of shop owners and projects a true picture of the sacrifices retailers endure to survive in a competitive market to tackle the challenges associated with keeping up with all the unbridled bureaucracy and the onset of digital commerce. This comedy shows Arkwright as a crafty retailer who keeps his hard earned savings in an old, battered Oxo tin that he hides under the kitchen sink.

So it is with a deep sense of déjà vu that one reads about proposals on how best to help retailers in a novel policy document piloted by shadow economy minister Claudio Grech. This document includes tax incentives tailored exclusively for shop owners, including reductions in corporate and property tax.  The PN’s new ‘Policy for Retailers’ document incorporates a fiscal approach based on 51 policy proposals written by the think tank led by a clandestine group of illustrious financial experts.

One ingenious idea is to set up a development bank which they suggest can be put into good use by loosening the grip on lending currently enjoyed by the oligopoly of two major banks in Malta.  Can this paternal development bank introduce low interest rates and better lending terms to SME’s? The PN policy paper wants to reduce the income tax rate paid by small businesses (presumably only retailers) to 10% on the income on the first €50,000 of operating profits. Certainly not only retailers should glow in the benign attention of the shadow minister of finance and exclusively enjoy superlative fiscal advantages.

To start with I am surprised how this policy paper excludes other categories of SMEs – why discriminate against other players in the business community who obviously have to continue paying tax at a standard rate of 35%. Can this special flat rate of 10% on retailers be deemed to be State Aid since it is ring fenced to the exclusion of other types of traders?

With hindsight, one remembers how the concept of helping a wider spectrum of SMEs was the hobby horse of Jason Azzopardi, who as a minister under the previous administration piloted the monolithic Small Business Act amid much aplomb and expectation. Then he said proudly that it was to be a milestone legislation which would help protect the interests of SMEs against unfair competition, particularly when bidding for government tenders.

The Act mirrors EU directives based on the Competitiveness Council policy on ‘Think Small First principle’.  Historically it formed part of the ubiquitous Small Business Act for Europe’ (SBA) endorsed by the European Council in 2008.  Sadly, it now sits silently in a library of dead letter legislation which is gathering dust on some nondescript shelf in a colonial building called the Main Guard facing the palace in St Georges Square, Valletta.

Observers lament that the “Think Small First” principle is not a reality yet and so far it has never functioned. Theoretically this law served as the starting gun to be fired before legislation is piloted as the latter first has to be vetted to make sure it does not harm the interests of SMEs. This category encompasses businesses employing fewer than 250, i.e. the overwhelming majority of enterprises in Malta.

No prize for guessing that it makes good economic sense to cater for SMEs rather than focus exclusively on the bigger fish in the pond. Nostalgically, we recall how the introduction to the Act solemnly asserts that “it further sets up the Enterprise Consultative Council and the College of Regulators, which together aim to provide a forum for consultation and social dialogue, advise government on challenges faced by the enterprise, address grievances which emanate from the harmful competition and come up with remedial action”.

More correctly we can state that legislative provisions should ease the burden on the fragile shoulders of SMEs which ideally should not be exposed to the full impact of regulation as larger enterprises. So the introduction by the opposition of a new policy to assist retailers unfortunately arrives a trifle too late. Over the years, both political parties have sung the political credo “big is better” and continue to pay lip service to small enterprises.

Undoubtedly the suggestion by the PN to start helping retailers is a step in the right direction, albeit it must be introduced to a wider spectrum of traders. Typically, the SBA contemplates the provision of a two-month cooling off period between the date of publication of laws, and their implementation. Another innovative concept (which unfortunately seems to be a dead letter) is to elect a college of regulators to advise the government on its regulatory policy, while government entities must conduct regulatory and independent surveys about their deliverables to ensure that they continue giving services in an efficient manner.

The uniqueness of this policy is that the college of regulators meet regularly to harmonize laws and remove overlapping and unnecessary bureaucracy. The SBA rules that any public sector entity offering services to business needs to carry out customer satisfaction surveys every two years, with the aim to measure the impact on the private sector. This is why a toothless SBA has turned out to be a farce more laughable than the BBC TV series ‘Open All Hours’.

The appeal for reform has been knocking on the doors of politicians to reduce unnecessary bureaucracy by overzealous government departments in their drive to assert their authority and follow their master’s orders to indulge in double speak. Such a language creates impenetrable walls for start-ups and confuses entrepreneurs. Certainly the budget was applauded as it amply catered for the low income groups, showering improved benefits for pensioners, but a comprehensive reform is overdue to incentivise start-ups and trim overheads faced by all the ranks within the SMEs community. In reality, without a root and branch reform we are fast becoming an island of shop keepers working all hours – busy trudging along an arduous and unforgiving journey.