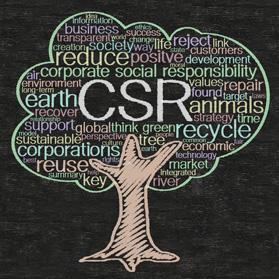 The Malta Chamber of Commerce highlighted that responsible entrepreneurship is a corporate state of mind. It weaves itself into the fabric of everything a company does and the corporate winners will ultimately be those that are governed properly and those which act responsibly. CSR is equivalent to responsible entrepreneurship. It is also a form of corporate self-regulation integrated into a business model. It should function as a built-in¸ self-regulating mechanism whereby a business would monitor and ensure its adherence to the law¸ ethical standards and international norms.

CSR is often seen as a company’s program to define and meet its obligations to society¸ which is unfortunate and misses the point. Today¸ CSR is a fundamental pre-requisite for a company irrespective of its size¸ to make its business relevant and sustainable in today’s world – it is a corporate state of mind that weaves itself into the fabric of everything a company does. Corporate winners will be those that are governed properly and fairly and those that act responsibly. Large or small and yes¸ in Malta too.

Responsible Entrepreneurship was most prevalent amongst local businesses both large and small – even if¸ at times¸ the business itself may have been unaware of the fact it was performing an activity that fell squarely into the CSR definition. Moreover¸ it emerged that responsible entrepreneurship is not the exclusive domain of large companies and that it is a critical ingredient to build a sustainable business in today’s world.

Why should companies communicate about responsible entrepreneurship? Through communication¸ companies can provide their clients with information about the enterprise’s values. CSR can also provide a more positive way to market one’s goods or services and set a positive example for other businesses.

Further to the above¸ one has to look at the actual benefits of CSR which include:

The project of the Malta chamber of commerce concluded that Responsible Entrepreneurship creates a win-win situation for business and the stakeholders around it. Mr. Fenech from the same institution pointed out that CSR should remain voluntary¸ should not be regulated and should remain business-driven. He explained the importance of the exchange of experiences and good practices amongst businesses. He added that many SMEs are already managed in a responsible way (at times unknowingly)¸ are socially engaged and traditionally participate in the life of the local community. He insisted that the owners’ ethical values often play a key role in the companies’ attitudes to CSR. He also stated that benefits include a higher level of customer satisfaction and loyalty¸ improved company¸ brand and product reputation¸ more motivated and productive employees and increased cost savings.

But a new European law could change that: