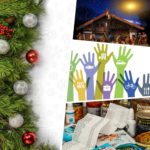 Whatever else Christmas may be about, it is definitely no longer exclusively focused on its spiritual origins marking the birth of Baby Jesus. The commercialisation of Christmas has been marching ahead without any constraint and islanders (with some exceptions) now purely seek hedonistic pleasures feigning the Holy feast, lavishing it instead with copious indulgence of gifts in the wake of exquisite banquets and other merry-making.

During such festive times when we are still in bereavement mode following the brutal assassination of a journalist can we earnestly look for closure to our national feeling of grief while all along we continue to hear exhortations from partisan political sources keen to indulge in a national pastime of negativity arising out of a deep urge among politicians to influence voter sympathy.

So while living through this surreal passage in our time, political leaders tell us how bountiful is the harvest such that since 30 years our economy is reporting a respectable surplus after the immediate past when we lived in debt.

Citizens throw caution to the wind as supermarkets and gift shops alike go into overdrive at this time of year.  So what does this say about us?  Has poverty been eliminated since we do not encounter beggars reaching for alms at City Gate. True but another subset of poverty has sunk in cursing thousands of the relative poor who feel themselves sinking into the poverty trap.

The good news is that Government has nominally im-proved the minimum wage for next year and continues to make good use of the EU fund to effectively distribute food hampers to families.

Not unlike a jovial Father Christmas, the social solidarity minister sounds triumphant extolling the merits of a caring society that donates free food packages.

This act of charity is replicated by a number of church and other lay organisations who collect alms for low income families and others in need.

Food parcels cheer the recipients with a cornucopia of pasta, dried vegetables, cereals and powdered milk.

Stop for a moment and reflect how our poor – as if living during the Victorian age participating in a Dickinson’s Christmas Carol sequel – gladly welcome food packages.  Such souls include those caring for large families who earn less than the minimum wage, single-member families or thousands who live on a low pension. This begs the question – with such a vast array of social benefits why do we still harbour vulnerable souls not covered by our welfare safety net.

Facing reality our politicians have woken up to the stark truth that while statistics show an improved standard of living and GDP growth is racing at 7.2% per annum yet modern times bring in their share of burglaries, thefts, corruption, avarice and now smart thieves daringly stealing from ATM’s.

All this underpins a society not at ease and certainly not counting its blessings. Sociologists tell us that for every trial that we go through in life, our faith, patience, and strength are tested as citizens encounter hardships, deprivations and suffer the pangs of nepotism and lack of meritocracy at work. The brave choose to fight challenges and face life with hope and conviction as trials are part of living.

Poverty can be defined in many ways and unfortunately its causes are deep and cannot be eradicated by occasionally giving out parcels of food.  In times of full employment, we do not expect to meet pockets in our demographics that continue to face social problems which they simply cannot evade; but on a positive note if problems are handled well, Christian faith emboldens us with the hope that these trials can strengthen us, build our character, and reinforce our resolve. Therefore, as a small nation next year we shall have to continue fighting poverty (both relative and absolute) with conviction, knowing that solidarity from richer members of the community can help the poor and emarginated to improve their misfortunes and slowly crawl back from the poverty pit.

Certainly our contributions to Caritas, l-Istrina and other institutions like id-Dar tal-Providenza shine a ray of hope to those less fortunate during the festive season. Poverty is a cancer that mutates in our anatomy with stealth – it manifests itself in all shapes and sizes and persons feel underprivileged when relationships among friends go sour, losing a job or suffering the icy jaws of infidelity – factors which lead to emotional tensions, bitter separations or divorce.  Such problematic marital or work relationships (such as sexual harassment at work) impinge on our ability to enjoy almost anything.

It is true that in most cases such misfortunes do arise from careless handling of individual differences, lack of communication and in case of marital relationships – keeping quality time together.

Our quest for future happiness is omnipresent, yet to be successful we are best advised to focus on the other party’s positive qualities rather than extenuate negatives.

Quoting George Sheehan ‘Happiness is different from pleasure, it has something to do with struggling and enduring and accomplishing’.

Really and truly ‘happiness’ does not mean living a life of pleasure. It is an old paradox, as the ancient Roman poet Horace attempted to answer it when he wrote; ‘Not the owner of many possessions will you be right to call happy: he more rightly deserves the name of happy who knows how to use God’s gifts wisely and to put up with rough poverty, and who fears dishonour more than death’.

The definition seems a noble sentiment but by sheer contrast quoting the Greek Sophist Phrasymachus in his opinion, this stoic attitude was the epitome of moral weakness.

For him poverty was miserable, and in his opinion happiness flowed seamlessly from wealth (a nest egg in a secret tax haven) such as power over men, an idea so pervasive that Plato wrote the eponymous book The Republic to challenge it.

This measure of subjective well-being correlates with wealth and power but beyond that it points towards a revelation that money doesn’t buy happiness, at least not beyond a certain point. The author argues that it is really the non-material things that leave a bigger and lasting influence on people’s sense of happiness and well-being.

Whereas today happiness is all too often associated with pleasure, owning fast cars, luxury yachts, being nominated for a medallion of honour, a fat deposit account in Panama or holidays at an expensive ski resort rubbing shoulders with the jetset – this is an illusive hedonistic mirage.

To conclude, drawing on the thoughts of the ancient Greek philosophers, wellbeing (and happiness) challenges us to think about values and our spiritual beliefs, to discover a sense of place in the universe, and to work out what we love and how to love it.  In doing so, a sense of wellbeing and collective happiness is earned – to be within the grasp of us all.