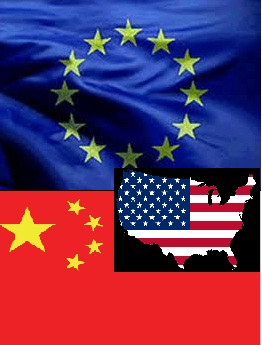 Negative news from the European crisis gravely affected the stock market. Upcoming China-US trade wars are about to affect the world economy. But how well balanced is the Chinese economy¸ and how can this powerhouse affect the globe’s already unbalanced economy?

The decreasing economic growth is also a major problem for China. The premier Wen Jibao has announced emphatically that job creation is an urgent priority in the face of slower economic growth and weakened exports. In view of a deceleration of the economic growth and the declining demand from abroad¸ the biggest effort is to provide more employment. These efforts included a reasonable growth rate¸ the support of labor-intensive industries as well as the assistance for small and private businesses. The Chinese government fears that jobs in the export industry get in danger if China is going to bow to the U.S. pressure and admit a currency appreciation of the Yuan. The living conditions should also play a big role¸ according to the macroeconomic policy¸ because they affect the “social harmony and stability”¸ the premier Wen Jibao said. Furthermore¸ China has a good source of demand for raw materials like corn¸ steel¸ oil amongst many others coming from all around the planet¸ a deceleration of industrial output would spell disaster on a global scale.

Besides China’s top bank bosses are differ from their western counterparts. They are first and foremost Communist Party members appointed to their jobs by the government. With regard to the leadership transition in 2012 (due to the retirement of Hu and Premier Wen Jibao)¸ many of the bankers will also fear for their jobs.

Credit Suisse analyst Sanjay Jain said¸ that up to 12 % of all of China’s outstanding loans may go wrong and non-performing loans may likely account for all of the banks’ equity. During the financial crisis in 2008 and 2009¸ Chinese banks went on a lending spree ($ 627 billion). Much of that money went to the railway ministry¸ local governments that set up financing vehicles to fund their pet projects and real estate developers. All of them are in potential trouble now. The railway ministry is under public pressure after a high profile train crash¸ the local governments are largely barred from borrowing from banks and property prices are in danger of collapsing. Despite all that¸ Chinese banks have reported strong earnings in the past year that often beat expectations. This may be a result of them putting less cash into the kitty to prepare for loans that may go sour.

However¸ the Chinese industry started very well into the fourth quarter this year. Because of the strong domestic demand and good businesses with threshold countries¸ China was again not drawn into the maelstrom of the global economic slowdown. Nevertheless China¸ being the second-largest economy¸ is concerned about the European debt crisis. If Europe does not succeed in damming the crisis¸ it can also make matters difficult for China.