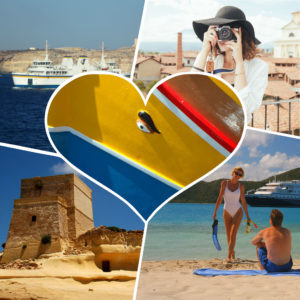 A PKF study acknowledges that social partners have to pull the same rope with the government to safeguard the national interest and help protect the hospitality sector. Hotel owners are all aglow to attract high heeled tourists and perhaps the dream may come true in the near future as a result of a generous investment of two billion euros planned to erect a number of high class hotel properties in various parts of Malta. Quoting MaltaToday, the Seabank hotel owner wants to build two towers for his Hard Rock hotel franchise at the site of the Institute for Tourism Studies.

Another behemoth is the 6-star hotel complex to be erected instead of the Radisson/Corinthia Hotels, and eight new apartment blocks along the St George’s coast. More splendour is in store to please the eye as Garnet Investments plans a Zaha Hadid creation close by and a tower at the foot of St George’s Road.

Two Zaha Hadid towers will be erected over Mercury House in Paceville plus a 15-storey hotel complex behind the Intercontinental Hotel. Adjacent to this new complex will be a 25-storey hotel planned by Paul Xuereb; and the extension of St George’s Park leisure complex developers are confident of rich pickings as the local market is highly liquid and millions will start flowing to finance such ambitious projects from a rich cornucopia of overseas nest eggs. Positive trends are seen in tourism: during the first ten months of 2015, tourist arrivals increased by 5.6% on a year earlier, while nights stayed and total spending went up by 5.0% and 7.4% respectively.

Meanwhile, in the third quarter of 2015 the number of cruise liner calls increased to 102, from 91 a year earlier. In fact, more jobs are created. Quoting the Labour Force Survey (LFS) the unemployment rate stood at 5.4% in the second quarter of 2015, down from 5.8% a year earlier. Buoyed by exemplary results on our national scoreboard, audit and consultancy firm PKF took the opportunity to compile an economic assessment of the hospitality industry and discuss how it influences the social fabric of workers directly involved in hospitality, compared to other sectors.

Starting from the general characteristic of touristic phenomenon, the PKF study analyses the prevailing characteristics of hotels and the economic environment. After highlighting strengths and weaknesses, the PKF study goes on to identify risks (exogenous and endogenous) and propose policies how to exploit opportunities. To start with, let us analyse the exogenous risks.

Naturally as a third of tourist arrivals are British, the Brexit decision will leave its mark. It is highly likely that sterling, after dropping to a 31-year low, will recover given the time for a partial rebalancing of external accounts and due to a recovering of international competitiveness for British goods and services. Most likely it will retrieve its strength, according to the most basic rules of currency fluctuation.

Considering the short term scenario it is probable that the pound’s devaluation will have a negative impact as British holiday makers may prefer to stay at home but in one year’s time the flow shouldn’t undergo an appreciable drop in arrivals. The general opinion is that Brexit will not be very harsh provided any drop in UK visitors is compensated for by arrivals from other countries, since we have now a diversified market.

This assumption depends on the severity of a future recession that may hit UK, yet some predict that the devaluation of the pound will not be severe since by contrast it is elbowed by an expected stagnation in Eurozone GDP. One currency may counterbalance the other. On the contrary barring another financial shock (a repetition of 2007/8) stability in the markets will reach an optimum balance and the spending power of visitors in general is not impaired.

Next to consider are the endogenous risks, such as the leveraged pressure on the natural and urban environment, mainly due to overcrowding, pollution and traffic. It is important not to forget that tourists judge the level of hygiene and cleanliness according to their country of origin, and it is crucial for us to offer an aesthetic wellbeing that conforms to their sensitivity. That is why constant upgrading is king and it is absolutely necessary to effectively plough-back past profits in tourist embellishments.

These could attract a higher class of tourists. In order to improve aesthetics, corrections must be carried out to some building excesses that were inevitably dragged by the tumultuous and swift development that went through the unbridled Sliema/St Julian’s development in the last three decades. The PKF study suggests a number of remedies. It starts to discuss the fiscal regime on accommodation which was charged at a reduced VAT rate of 5% but which in 2011 went up by 40% to 7%.

Adherents of the pre-2011 VAT rate argue that the impact of a reduction is beneficial but economists argue that the fiscal multiplier is lower than 1 (multiplier is little in small economies, widely open economies and growing economies, all factors that fit with the Maltese economy). It is suggested that instead of a VAT cut there should be another substantial percentage reduction in the utility tariffs in the budget once the new ElectroGas power generation plant and the gas pipeline start functioning.

Moving on to another risk one meets the effect of the eco-tax contribution: this generates a modest income to fund improved landscaping and a cleaner environment (tasks that usually cannot be undertaken by private initiative due to their physiological lack of profit margins).

Next is traffic. This has become public enemy number one to commuters. One of the most obvious causes of traffic is the high usage of personal cars. There are more than six vehicles for every 10 residents, which puts Malta in 9th place in this world ranking; whereas the density of housing is also among the highest in the world, so it is no surprise that the road network is inundated with traffic. The public transport system has improved but has still a long way to go to change the current mindset – commuters prefer using their own car to drive to work or to go shopping. This exacerbated the traffic conundrum particularly in the summer due to increased tourist flow, with bus schedules rarely met and bus stops frequently skipped because of overcrowding.

The next item on the menu is wages. As hotel owners and restaurateurs are earning improved margins (refer to Deloitte quarterly results) the question is – should there be an upward revision in the minimum wage. The answer is swiftly given by the Malta Employers Association. In its proposals for Budget 2017 it has called on the government not to raise the minimum wage. The association thinks that efforts should be made to minimize the number of workers on the minimum wage.

But quite a few workers are employed on the minimum wage in the hospitality sector, in amenities such as pool attendants, dishwashers, cleaners and general unskilled help. In any case MEA advocates that wage increases should be a result of the COLA mechanism (adequately revised to mirror latest spending habits) rather than raising wages artificially. The association also said that in spite of improvements in educational investment, the rate of early school-leavers was leaving much to be desired. Certainly, inflation is on the increase and this effectively waters down the purchasing power of all workers – especially those in low unskilled positions.

In conclusion, the PKF study acknowledges that social partners have to pull the same rope with the government to safeguard the national interest and help protect the hospitality sector, which by its nature is a volatile industry.

Readers may obtain a free copy of the PKF study, contact us here: info@pkfmalta.com