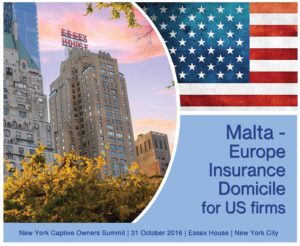 PKF will participate in a follow up event planned to take place at the end of October 2016 in New York – ‘Captive Owners Summit’. This time it will be under a different set up, meeting with captive owners in a more intimate setting under the prestigious hosting capabilities of Captive Review. PKF Malta, with the support of FinanceMalta, Bee Insurance Management and a line of esteemed speakers, had hosted an event in New York on 29 March 2016, to promote Captive Insurance opportunities for the US market. This event was one of a series of events in the PKF Malta calendar with the aim of promoting Malta as a domicile of choice.

This was the first initiative of its kind organized by a Maltese contingent in New York as a Malta specific event. This Insurance Summit had the aim of encouraging US Companies to host their European Captives in Malta, by explaining what it entails, how to survive Fatca and CRS, what they should look out for and finally the advantages Malta offers. PKF Malta thinks it is important to maintain momentum and decided to attend a Captive Owners Summit organised by Captive Review in New York to further promote Malta’s unique benefits in October 2016.

FinanceMalta being at the forefront to stimulate investment thinks this initiative helps Malta remain a compelling proposition for prospective investors seeking to establish or extend their footprint in Europe. The New York Captive Owners Summit is a highly exclusive learning and networking event tailored for captive America’s leading captive owners.