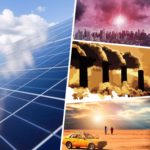 How can we tell if the constant barrage in the media to combat climate change is not another hoax like the millennium bug? The answer is that we are all noticing a change in climate, and this needs to be checked. What is undeniable is the increase in carbon dioxide concentrations and other greenhouse gases, such as methane and nitrous oxide caused by our activities – mainly the explosion in car ownership, not to mention the increase in heavy industry.

We know that carbon dioxide is emitted in the atmosphere: just recall how only a few decades ago, we ran our Marsa power station on coal and later switched to burning fossil fuel (including heavy fuel oil at Delimara plant). Of course with the increased influx of tourists, there are more transport emissions. Certainly, concentrations of carbon dioxide in the Mediterranean have increased along with the atmospheric concentrations, giving us colder winters and higher humidity in summer. All lines of evidence taken together make it unambiguous that the increase in atmospheric carbon dioxide concentrations is human-induced, primarily a result of fossil fuel burning. It is a fact that greenhouse gases when controlled can serve a useful purpose; that is, to absorb infrared radiation from the Sun and re-emit it in all directions.

This natural greenhouse effect causes the creation of water vapour and resultant carbon dioxide and this functions like a shield to protect the Earth’s surface, which otherwise would be intolerable. The mechanism assures us of the habitable average temperature that results. Increasing the concentration of greenhouse gases directly increases the atmosphere’s optical thickness for infrared radiation, which alters the total amount of solar radiation absorbed by Earth. The same amount of energy Earth receives as solar radiation, in a steady state, must be returned as infrared radiation; the energy of radiation depends on the temperature at which it is emitted and thus determines the mean temperature at the emission level.

The target was that by 2020, the EU would seek to obtain 20 per cent of its total energy consumption requirements with renewable energy sources. Malta has so far been a laggard in this regard as only small steps have so far been taken. As a definition, renewable energy includes wind, solar, hydro-electric and tidal power as well as geothermal energy and biomass. From studies published by the EU, one notes that Germany leads the pack as a country which has invested the highest amount in this sector, claiming to be the world’s first major renewable energy economy (in 2010, investments total €26 bn). According to official figures, some 370,000 people in Germany were employed in the renewable energy sector in 2010, and it is no surprise to discover that most companies benefiting from this sector are small and medium-sized companies.

One may question why Malta, with better exposure to rays of the sun, has not responded to this call to increase production of electricity from use of photovoltaic panels, considering that prices for the equipment have been dropping. Can we remain complacent when reliable sources show several lines of evidence to prove that carbon dioxide is on the increase in past two decades? Unfortunately, any large-scale renewable energy systems are not a practical solution on such a small island unless experiments being tested regarding using floating panels in the sea prove feasible.