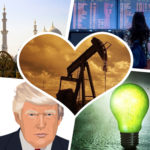 Some predict oil price next year will reach $100 a barrel, particularly if US friction with Iran escalates.

This unilateral move has been met with much chagrin from the side of the EU partners who collectively signed the nuclear deal with Iran. In 2015, the agreement had lifted heavy sanctions in return for a commitment from the Islamic Republic to abandon its nuclear enrichment programme.

President Donald Trump re-imposed Iran sanctions in a number of stages – the first one covering metals and cars. In June, the State Department called on buyers to stop importing Iranian oil or risk facing US sanctions.

Analysts contend that as full sanctions against Iran take effect, perhaps in combination with production problems elsewhere, maintaining global oil supply might be challenging. It creates pressure to maintain an adequate spare capacity cushion. This certainly powers the oil price upwards possibly next November when the next round of sanctions come into effect.

Readers may counter-argue that any shortage of Iran oil can be substituted by extra production from US fracking industry – lately this has seen great potential. Yet, this may not work out to achieve an equilibrium, so in the short term it could place more than two million barrels per day at risk.

US administration officials have said they might look at requests to stabilise the market on a case-by-case basis to avoid oil shocks, while also maintaining that the target is to cut Iranian oil imports to zero.

At the same time, global demand for oil goes on unabated such that the IEA raised its 2019 forecast for oil demand growth around the world by 110,000 barrels a day to 1.5 million barrels. Some predict oil price next year will reach $100 a barrel, particularly if US friction with Iran escalates.

How, does this economic prognosis affect us, being the smallest EU member?  Facts show that we still rely 100% on imported fossil fuel for our energy. Attempts to wean off the dependency and switch to green energy are welcome yet we still can only count on about 6% of energy from the sun.

But it is not all doom and gloom – consider how much progress we achieved since Independence. Since 1964, we have tried and succeeded to diversify our economy – to break the mould of a fortress island dependent on the British services.

Nostalgically, we managed over the years to diversify the pillars of production to include iGaming, financial services, manufacturing and mass tourism. Even so we must not forget how fragile these are, and subject to market and political oversight from Brussels.

Perhaps now that we have started to register a modest surplus it is a good time to diversify our vision by investing longer term. Our geographical location and maritime tradition yearn for new investment on logistics, transportation, LNG storage and hydrocarbon extraction.

While discussing the subject of diversification particularly in the energy sector, PKF is keen to share its dream that one day the island will reap oil discoveries as was the case with close neighbouring countries. A delegate from PKF has been invited to attend a three-day conference next October in Cyprus which focuses on such E & P issues.

The European Mediterranean Oil & Gas Summit will discuss the geo-strategic, commercial, technology and regulatory issues that will shape the management and future development and commercialisation of oil and gas assets and infrastructure in the European Mediterranean region. The agenda includes ground-breaking solutions to maximising return on investment on hydrocarbon transportation, storage, processing and extraction.

In this context, PKF will be presenting a paper discussing the potential for the island to become a future oil and gas servicing hub. History tells us how our past attempts in exploration were not complimentary.

It was 1954, when the first onshore concession was awarded to a company called D’Arcy Exploration (BP) to drill a well in Naxxar. Since that fateful attempt all other drilling attempts were unsuccessful. Over a 60-year stretch we only test drilled 13 wells which experts consider as too little but is never too late to try regaining parts of our Continental shelf boundary claimed by others.

Yet, it is encouraging to know that the island’s main source rock for the oil is expected to be rich in the organic Streppenosa oil shale unit which is designated world class in its prolific oil generating capabilities. No wonder the nearby offshore Sicily Vega oil field, with an estimated resource of one billion barrels of oil in place, is only 20km away from the northern border of the latest zone in Malta’s exploration efforts.

Needless to say, experts predict that the proximity of similar concessions and similarity in geology to the producing basins of Tunisia and Sicily lend support to the theory that oil strikes for Malta cannot be excluded. The “intra-basin” ridge trend offers a new and highly prospective oil strike in our waters provided we reach bilateral agreement on contested areas.

The good news is that a National Oil Company has been incorporated to help promote upstream business so can we hope that behind closed doors the authorities are devising plans to kickstart the drive to attract foreign investment. Another harbinger is the prediction mentioned earlier that oil price will rave on an upward trajectory.

The subject is a taboo. Pragmatists argue exploration is a pipe dream fit for visionaries hoping to attract countries such as China as part of its One Belt-One Road investment policy. Operators now use modern technology and Artificial Intelligence – this may surprise us with good tidings.

It is fair to say that our politicians know that any success in the extraction sector may take decades to be monetised into cash.  It is a long gamble to appease voters. It is a slow return when contrasted to dividends earned from mass tourism, iGaming and financial services.

This may be true; yet all incumbent sectors took a decade or more to reach optimisation.

Sadly, in any democracy, thinking short term when forging macro-economic policies resonates a populist ring but left unchecked, this policy can harm the enlightened self-interest of current generations.