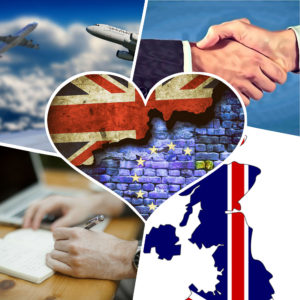 The UK’s determination to go ahead with its Brexit plans will spell into lengthy negotiation proceedings that are not only time-consuming but also very costly.[1] Meanwhile, the UK’s Prime Minister Theresa May is intent on invoking Article 50 of the Treaty of the European Union (TEU) by the end of March. This article gives a Member State the right to withdraw from the European Union (EU) and was introduced in the Lisbon Treaty. Once Article 50 is invoked, it provides that negotiations are open for two years after which the state’s membership is terminated.

Given that the UK has been a part of the EU for 43 years, there are literally thousands of subjects that need to be discussed.[2] In fact the amount of work is so astounding that keeping up to the two-year deadline will be an achievement. To the UK’s disadvantage is also the fact that this is all ‘uncharted territory’ meaning they cannot rely on past experiences to find their way about.

At the heart of the Brexit deal is the trade aspect that is something the UK cannot deny that it wants to maintain. This puts the UK in an awkward position since on the one hand it wishes to sever ties with the EU but on the other it knows that it cannot afford to lose the income generated with a huge global market as is the EU. Negotiations of a trade nature do not only involve the EU institutions but is a matter pertinent to the other players, meaning the EU Member States.[3] The issue is a sensitive one since the other Member States may feel cheated by the fact that the UK is renouncing to its obligations with the EU but is still able to enjoy the benefits of a single market.

Amongst the salient points of the Brexit debate is that the results of the referendum cannot be ignored but there is also the fact that a large number of people voted to remain in the EU. [6] The country is still so divided on this point that Lord Owen, an Independent Social Democrat, pointed out it is possible to reconsider the UK’s position to leave all through the two-year negotiation process, when technically the UK will continue to be a full member of the EU.[7] On the other hand, Lord Bridges, Minister for the Department for Exiting the European Union, said the Bill should be passed as swiftly as possible allowing negotiations to proceed[8] – this would help to reduce the current state of uncertainty.

As an example, the effects of Brexit on the UK aviation industry would be influenced by the impacts on economic activity and the sterling (GBP) exchange rate. It is estimated that the repercussions will be negative: there will be a slowdown in economic activity and the sterling exchange rate will fall.[9] The weakening of the GBP makes travelling out of the UK more expensive for its residents because less goods and services can be purchased with a given amount of pounds sterling. This works vice versa for people visiting the UK as they will see the purchasing power of their currency vis-a-vis the pound sterling expand, encouraging foreigners to travel to the UK. Ideally, there could be an offsetting effect; however the estimates predict a decrease in air passengers to the UK of between 3-5% by the year 2020.[10]

Legislation is a fundamental aspect of the European Union and from an aviation perspective the EU has imposed on the Member States various measures governing issues of consumer protection, safety, security and the environment.[12] This was one of the arguments of the Leave campaigners – to rid the UK of the restraining legal instruments of the EU institutions. However, the UK’s necessity to maintain strong ties with the EU means that it will still be exposed to European aviation legislations. This is in the face of the reduced power of the UK government to participate in the decision-making processes of the EU. A case in point is membership to the European Common Aviation Area (ECAA) which permits access to the Europe’s single market in aviation services – the Single Aviation Market. Membership to the ECAA involves compliance with aviation laws by the EU.

The ECAA is open to non-EU members and, though the UK has for long been a proponent of liberalizing the aviation services market, it would be the simplest way for the UK to have access to the Single Aviation Market.[13] However, this entails having to comply with European Union laws on aviation bringing the UK back to where it started from. To make matters worse, the European Union does not only mean access to the Single Aviation Market but also to other aviation services agreements, notably that with the US, in the EU-US agreement. As a member of the ECAA, the UK could be a party to the EU-US agreement, such as Norway and Iceland have done.[14] On the other hand, the UK may take idea from the EU-US agreement and decide to go for an EU-UK agreement, allowing the UK to compromise its exposure to EU aviation laws. Without going in to the merits of an EU-UK aviation agreement, this could result in higher prices for UK carriers[15] opening the door to new opportunities for non-UK based carries.

Now that the UK government has been given the go-ahead by parliament to continue on the road to Brexit, rumours about a second independence referendum in Scotland are gathering momentum.[16] Nicola Sturgeon, First Minister of Scotland and leader of the Scottish National Party (SNP), has declared she will ask the Scottish Parliament to grant permission for a second referendum, which she wants to be held before Britain exits the European Union, that is, between autumn of 2018 and spring of 2019.[17]

Considering the SNP has a substantial majority in the Scottish Parliament it is easy to picture the scenario of Ms Sturgeon’s request being given the green light. On the contrary, Theresa May is reluctant in allowing the referendum to proceed before the Brexit negotiations are done with, accusing the Scottish First Minister of creating ‘uncertainty and division’.[18] Technically, it is improbable for Mrs May to deny the Scottish people the right to a referendum but she could object to the referendum taking place before Britain has left the EU.[19]

Ms Sturgeon’s argument cannot be brushed aside: Scotland ‘stands at a hugely important crossroads … we didn’t choose to be in this position … the stakes are high’.[20] This means choosing between either leaving the EU or becoming an independent country. It is less than three years since an independence referendum was defeated in Scotland by a vote of 55-45.[21] The EU institutions in Brussels have warned Scotland would have to re-apply to join the EU if it goes ahead with its plans for independence.[22] In contrast to Ms Sturgeon’s expectations of being speedily ushered into EU membership – with other countries waiting for their turn to join the EU, Scotland’s application process could last for years.

The leader of the SNP was not in favour of leaving the single market in what has been termed a ‘hard Brexit’.[23] On the other hand, the economic future of Scotland as an independent country is said to be riddled with difficulties. Top economist Paul Johnson, director of the Institute for Fiscal Studies, cautioned of an ‘economic chaos’ – the country having to choose between raising taxes or cutting spending.[24] He also pointed out Scotland may be cornered into having to adopt the euro to be able to stay in the EU.

Mr Johnson presented the situation that taxes collected per person from Scotland were similar to those collected throughout the UK. However, the rate of spending in Scotland was higher per person than in the rest of the UK. This state of unbalance was compensated by an inflow of money from the UK in favour of Scotland. Severing this inflow would have to be made up for by an increase in taxes.[25]