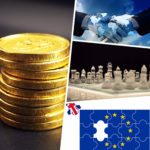 Last week in a summit held in Brussels, German Chancellor Angela Merkel said she was confident Britain and the rest of the EU could reach a good deal on Brexit “if we are all clear in our minds.”

Naturally, what constitutes clearness of mind is a vague concept and can be somewhat ambitious in the context of reaching such a deal. Yet Merkel blew hot and cold when she expressed that “From my point of view, there are absolutely no signs that we can’t succeed”.  In a defiant yet stoic approach she exclaimed that, “What I find it hard to understand, when we need a result by March 2019, is why people are already talking in October 2017 about what might happen at the end of the process.” This mild mannered assurance clouds the differences that materialise on what should be the divorce money claimed by the 27 members.  So far the sum claimed by EU is nowhere close to what Eurosceptics want or wish to pay.

A compromise deal on the exit fee can only be found if both sides forget deep differences of approach.  Having stood for a snap election last June which saw Theresa lose her parliamentary majority she is now in a weak position to negotiate – faced with a fractious coalition at home.  There is a good chance she may face a formal leadership challenge, which can be triggered if just 48 Conservative MPs congregate against her and sign a letter of no confidence.  Time is not on her side – not with a ticking clock imposed by Article 50, which dictates that Britain and the EU have to decide swiftly what the trade relationship should be after Brexit.

After a year of internal debate in the UK since the referendum another popular option is surfacing on the horizon.  This takes form in a CETA type agreement similar to the one signed after seven years of negotiations by Canada-EU, creating a European “free-trade area,” with a customs agreement.  But this option may end up as a damp squib and not find support by rebel Tory back benchers.

Last year, David Davis the secretary of state for exiting the EU chirped Britain could be a “beacon for free trade across the world” and a “more glorious country” with an immigration system that controlled the numbers but also encouraged the “brightest and best” to come.

The silver lining is that a weak sterling temporarily improves its balance of payments, as it needs less capital to finance domestic business and will make exports more competitive and consequently increases demand for exports.  Theresa May, sensing that investors are already flowing out from the UK, now wants to provide them with some sort of carrot that would make them think twice before they leave the United Kingdom.  This may take the shape of introducing a low corporate tax rate which turns the UK into an attractive haven.  Equally helpful will be a move by The Bank of England to lower the amount of capital that banks have to hold in case of unexpected risks.  This may encourage foreign banks like HSBC, Wells Fargo and others like JP Morgan Chase to rethink their announcement of staff layoffs.

Cynics said that it was “not constructive” strategy to be “offering up Britain as a low tax domicile” to Europe as a future Panama (without its 2 major canals) in the heart of Europe.  Obviously, to replace lost revenue there will be higher direct taxes to balance any shortfall in the medium term. However, will this low tax scenario open the floodgates for UK based gaming companies resident in Malta to cross the Channel?

It goes without saying that the future remains obscure as nobody with a crystal ball knows how a Brexit deal will pan out.  As a word of caution, Malta needs to be alert with a Plan B in place to protect its competitive edge for hundreds of gaming companies and pharmaceutical factories should the temptation to migrate to UK become irresistible.  Our Plan B can take the form of a complete tax overhaul away from the imputation system.  Some are advocating emulating the success of Estonia’s flat tax system hailed to be the most transparent in Europe.  Some of its advantages include:

• Resident companies do not pay tax on their profits until they are distributed to shareholders.

• There is no separate capital gains tax. Gains derived by resident companies or branches of foreign companies are exempt until a distribution is made.

• Foreign tax is mostly relieved by exemption by virtue of the provisions of the double tax agreements with most overseas jurisdictions.

Such a reform would help us to retain existing business and attract new ones.  Back to Britain in the past it successfully promoted itself as the Gateway to Europe for many international companies such as Nissan and Honda.  There is uncertainty as to whether or not Britain will have access to the single market so that telecom companies such as Vodafone are considering whether to relocate headquarters into other parts of Europe where they enjoy preferential tariffs.

It goes without saying that the UK is a prime contributor to the EU common pot which will in the future have to be replaced or else future EU budgets will need trimming. Malta is one of the countries that could be affected by Britain’s decision to leave the EU as the obvious sector to suffer may be tourism.  UK visitors, now with a weaker currency, may switch to holiday at home.  In diplomatic circles, we all know that the UK has been a strong ally with Malta in EU circles on various subjects including that of resisting tax harmonization. Consequently its departure will make it harder for Malta to have its voice heard in Brussels.

What does Brexit mean for UK companies?  Some observers predict that the UK may try to declare itself a Free Trade Zone to buttress competition and raise productivity. France and Ireland have already expressed concern on such a move even if the repercussions may be premature to predict. Upon reflection, it has been a bold move for citizens of a democratic Britain to voice their wishes in the referendum.  This comes at a cost but on a positive note, pro-Brexit adherents say that new commercial opportunities will surface which previously were not within reach.  To conclude – none will disagree that it is going to be a chilly winter for Theresa May unless she can avoid reaching the cliff edge.