US shale oil production has boomed, and coupled with the drop in demand from Europe and China the situation has not helped build confidence in oil prices

Many Europeans are asking the question – why did their government hesitate to immediately reduce pump prices when Brent oil has dropped by about 23%?

The answer is not so simple. Oil is traded globally using dollar payments mechanism and the recent drop in the euro against the dollar has jacked up the purchase price of crude. It is a fact that Brent crude oil fell to its lowest level in almost four years this month after key Middle East producers decided they would keep output high even if that meant lower prices. 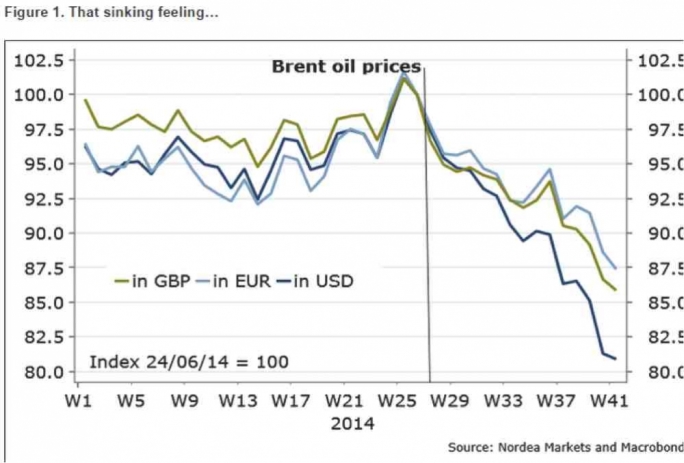 Saudi Arabia is quietly telling the oil market it would be comfortable with much lower oil prices for an extended period, and observers interpret this as a U turn in policy that may be aimed at slowing the expansion of rival producers, including those in the US shale oil sector.

The dollar index, which measures the greenback against a basket of currencies, was down 0.3 per cent to the euro at $1.2668. One may ask what is the root cause for a sudden collapse of the oil market? The answer may be due to two factors – a combination of abundant supply and concerns about global demand that have weakened oil prices, with the Brent crude futures traded at $88.40, having touched $87.74, the lowest level since December 2010.

Is this a healthy sign for consumers? Actually the benefits are slow to percolate in the non-oil producing countries, particularly those in the Eurozone, as the devaluation in the euro automatically makes the acquisition of crude more expensive. Is the antidote to rally oil prices, a strategy involving oil producers to start cutting production?

It is a fact that most of them have balanced their budgets based on a minimum threshold level at $100 per barrel and now winds of change have suddenly subjected their economies to face a serious shortfall in revenue, yet it is not so easy to simply cut back production and continue to risk reduced sales.

In fact Kuwait, a heavyweight in the Opec oil producers club, was unlikely to cut production to support prices, while it may surprise many that Saudi Arabia has privately said it could be comfortable with an $80 oil price.

It is true that few expected Brent crude oil futures to have fallen steadily, dropping 23 per cent from a June high of over $115 a barrel, as of course the war on IS has increased fears of a Mideast supply disruption. Others blamed the drop in prices due to the success of new production from US shale.

This has boomed, and coupled with the drop in demand from Europe and China the situation has not helped build confidence in oil prices. All told this sudden drop in the oil price increased pressure on the price of gold, which has risen to a high of $1,237.30 an ounce. It is obvious that a weaker euro will suit exporters in the Eurozone who have been lobbying to curb the value of the currency to stimulate their flagging economies and create jobs.

These claim a reduction in the trade weighted value of euro may be the panacea to help the region’s anaemic recovery. Economists reason that everything remaining constant a rise in exports due to competitive euro prices will boost company profits and gradually encourage new business investment, more jobs and consumption.

But analysts warn that the relationship between exchange rates and export volumes is far from clear-cut. They recount a number of instances when a currency plunges yet exports do not automatically increase. This happened to sterling in UK and yen in Japan. Equally there are also doubts over just how much difference can the euro’s fall make to exporters in different countries as this depends on individual competitiveness of each producer country.

To quote: Jacques Cailloux, an analyst at Nomura, takes the French export sector as an example and in his opinion France  is “structurally damaged” and hence unlikely to benefit much from a cheaper euro. Naturally all this brings us back to the argument about the relationship of the euro/ dollar exchange rate and the 23% slide in the price of Brent oil.

It is mathematically correct to state that a weaker euro is going to help exporters but the crux of the problem is whether the temporary advantage from a euro devaluation, and hence cheaper exports, will be matched by higher growth to offset expensive imports. Therefore readers ask: what is the right moment when governments in the euro area can bow to pressure from consumers to lower pump prices?

Hot on the heels of this issue is the view taken by PN deputy leader Mario de Marco, who insisted in parliament that the government was duty bound to revise fuel prices downwards as in his opinion such prices were having a negative impact on families and businesses. The deputy leader also criticised the government by saying that in his opinion Malta was lagging behind other EU countries in industrial production, exports and imports.

He called for an immediate reduction in fuel prices as this will directly boost competitiveness. Opposition finance spokesman Tonio Fenech reiterated that according to the international oil price, petrol should be sold at 22 cents (per litre) lower than at present while diesel should be 30 cents cheaper.

Opposition energy spokesman George Pullicino called on the government to immediately revise prices, noting that the price of oil was the lowest in years. He lambasted the government for hiding under the inelasticity curve of the dollar/Brent oil price structure and invited an equivalent cut in pump prices. Otherwise he chastises the government for making a hefty profit.

But if the government is making a hefty profit is this bonanza not helping to relieve the agonizing finances of EneMalta? Another aspect in the formula of Malta’s overall competitiveness is the surcharge paid to ship carriers to compensate for high oil prices, then at €113 per barrel. Typically we discover how the Grimaldi Group will review at the end of the month before deciding whether to cancel the fuel surcharge.

With a good portion of Malta’s trade being carried by Grimaldi, (represented by local agents Sullivan Maritime) the stakeholders complained that while there were considerable objections to the increases in other port tariffs and their impact on competitiveness, no one in Malta had put any pressure on Grimaldi to reconsider its local surcharge. A spokesman for Sullivan Maritime said that before any reduction could be applied, the Grimaldi group first had to consume what it had on board in terms of bunker.

Equally relevant is EneMalta’s position – it will hold old stocks bought at high rates and technically cannot afford an immediate reduction in pump prices. To conclude nobody can accurately forecast which way the price of crude will follow next year. Quoting HSBC, it said if members of the Organization of Petroleum Exporting Countries (OPEC) maintain current production levels, Brent crude oil prices may fall further to the US$80 per barrel level.

On the contrary we find that JP Morgan Chase expects prices to rebound, even projecting the average Brent crude oil price to settle at around US$111 per barrel by the end of 2014. Reading trade journals one gets the feeling that if crude oil drops below $80, prices will likely find support near $75-76 since that level represents the two double-bottom patterns of 2011 and 2012.

One  recalls  how crude’s price rallied to its all-time high in 2011 from its 2008 low. George Davis, chief technical analyst of fixed income and commodities at RBC Capital Markets remarked: “If we do break below $80 per barrel  we can easily see another $3 or $4 of downside risk.”

In spite of a sharp drop in international oil prices, consumers in Europe are still paying through the nose to buy fuel at high prices, owing to the government’s indecision to slash prices but of course part of the reason for such higher prices is that the dollar has remained strong against the euro, and oil is priced in dollars.

Again experts state that politicians who play to the gallery citing daylight robbery should know that it is the price of refined petroleum that determines wholesale prices, not crude oil prices. Again the price of refined petroleum also reflects a higher production charge due to a shortage of refineries in Europe. Readers may wish to follow the graph with this article, which compares the trade weighted index of crude oil prices computed in three currencies. The yellow line marks the sterling price while the euro line is light blue. Dollar values are in bold dark blue. This may help solve the mystery of fluctuations in pump prices.