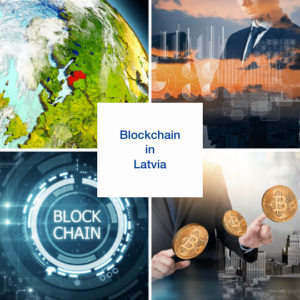 Blockchain is a fast-growing technology that is believed to change the everyday life of many industries starting from cryptocurrencies and gaming to banking systems and even curbing shadow economies. Although the concept of blockchain was first used in 1991 by Stuart Haber and W. Scott Stornetta, it was conceptualized only 17 years later by Satoshi Nakamoto, the developer of bitcoin.

The use of blockchain started to grow rapidly after 2016 expanding in new industries like gaming and banking. Blockchain is described as a distributed ledger transaction or more simply a transparent, secure, and incontestable log of transactions that can be accessed by downloading the ledger. Although blockchain technologies are mainly linked to cryptocurrencies (especially bitcoin), they can be widely used in other industries as well.

Today, in 2020, Baltics are one of the leading countries in the development of blockchain. Although Estonia and Lithuania outstand remarkably from the rest of the countries in the Eastern European region, Latvia does not fall far behind its neighbors and has invested an immense amount of resources to develop blockchain technology. And it seems that the hard work has finally been starting to pay off.

In 2017 all three Baltic countries signed a Memorandum of Understanding to support blockchain initiatives. As a part of the memorandum, in the same year, Latvia’s parliament passed a one of a kind startup law with a special flat tax regime for startups. Another government’s initiative is a startup visa to encourage the creation of startups that in turn would trigger blockchain and crypto-based projects. The Financial and Capital Market Commission (FKTK) helps new investors and businessmen by consulting them on the needed licenses in the blockchain industry.

It seems that the attractive tax regulation and support from the government has been successful because in the first five months of 2018 Latvian startups had raised over 28 million euros in organizing ICOs (initial coin offering) which was a huge improvement when compared to 37 million euros raised throughout all of 2017. The biggest contributors were a digital bank “Forty Seven Bank” (10.84M EUR), a global bitcoin exchange platform “Globitex” (9.7M EUR), and a platform allowing to invest in scientists’ intellectual property rights “Aeternum” (3.05M EUR).

Another Latvian based company using blockchain technology is Latvia’s national airline company “airBaltic”. In July 2014 the company announced that it would accept bitcoin payments for flight bookings. “airBaltic” was the first airline in the world to take such a step. Although in the beginning, the initiative did not get much interest, later the company’s representatives revealed that the number of payments in the cryptocurrency has increased.

Latvia is also known in the blockchain industry by hosting the largest blockchain event in the Baltics in November 2017– the “Baltic HoneyBadger” Bitcoin Conference. The conference was one of the most important events on blockchain in the industry as it hosted numerous well known and respected speakers as Elizabeth Stark, the leader of the “Lightning Network” initiative and Pavol Rusnak, the creator of “Trezor”. The conference was well received and earned a great deal of popularity across the industry. The event was continued by another “Baltic HoneyBadger” conference two years later in 2019, again in Riga.

The blockchain industry has evolved in Latvia not only in the private sector but in the public sector as well. At the beginning of 2019 Economic Ministry of Latvia introduced two pilot projects to boost the efficiency of the services offered by the state.

The first one would ease the process of acquiring the status of a limited liability company (SIA) in Enterprise Register (UR). Currently, the Commercial Law stipulates that the board of Ltd is obliged to keep the register of participants with each owner or other changes in relation to the owners, as well as the board must submit the current version of the register of participants to the ER within three days of the change. The use of blockchain technology would reduce the information flow time between the entrepreneur and the ER and ease the process of registering changes for both sides.

The second pilot project involves the implementation of the cash register reform that would strengthen the supervisory capacity of the State Revenue Service (VID) and provide a proportionate financial and administrative burden for businesses to ensure compliance with the requirements set for them, thus reducing shadow economy. One possible solution would be to create a system or use blockchain to transfer trade data to the SRS online. A special 48-hour tax blockchain hackathon was set up to find a technical solution in April 2019. Just in two days, a winner team called “Z Book” created a solution by using QR code as a signature-based on blockchain technology.

Although Latvia cannot be considered as one of the leading countries in blockchain technology, it has achieved immense progress in the last three years by creating an attractive law system and fertile ground for startups based on blockchain. Moreover, Latvia’s government has also shown its 21st-century side by initiating the use of blockchain in the public sector as well. And the fruits of such actions can already be enjoyed: more and more startups are created every year and blockchain technology is becoming more known and used in Latvia. Hopefully, this trend will go up and create more and more success stories in the coming years.