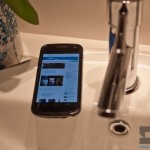 Can’t part with your phone even when you’re in the bathroom? You’re in good company. About 75% of Americans admit they use their phones in the bathroom¸ according to a new study.

A report by marketing agency 11mark found that three in four people are texting¸ emailing and even talking on the phone while in the bathroom. In fact¸ about 25% of Americans said they always bring their phone into the restroom.