As published on the Malta Independent on Sunday 8th June 2014

Air Malta has been in the news again following comments on the success or otherwise of the root and branch overhaul which the PN government started three years ago based on a report by external consultants Ernst and Young (E & Y). Projections in this plan (reputed to have cost around €3 million) show airline’s profitability returning in 2016 and are expected to be on a similar level as the profitability of major carriers. 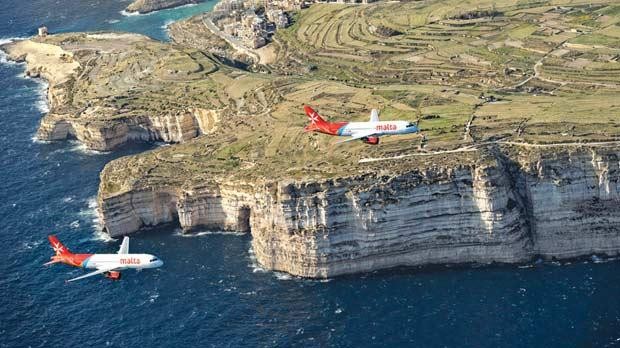 However¸ more grey clouds are gathering after a heavy rightsizing exercise was concluded (this cost about €30 million) as the much acclaimed profits are still illusory although some improvements have been registered. At the onset of the E & Y rescue plan¸ the Airline Pilots Association had doubted that it would succeed in resuscitating Air Malta. Due to restructuring¸ the airline sacrificed 20 % of its capacity¸ including the surrender of certain profitable or potentially profitable routes. The solutions included another capital injection (as approved by the Commission) of €108 million¸ which consisted of proceeds from selling its head office for €66.2 million¸ as well as its subsidiaries and engines (€24 million); a bank loan of €25 million; and a smart package of a debt-to equity swap of €52 million; €60 million in a fresh share issue in 2013; €15 million in 2014; €3 million in 2015. All this comes alongside many cost cutting exercises and a sharp rightsizing of the staff complement.

Still¸ the Commission had sown doubts on whether the rescue plan as advised by E & Y and its implementation would succeed in reviving the airline¸ saying it was based on unrealistic assumed market growth of 5.9 % . In particular¸ projected revenues through catering and on-board sale seem to be too optimistic. Critics of the rescue plan say that having sold its family silver on the cheap AirMalta is now denuded of any assets that in the past generated good profits when times were hard.

One cannot forget that in the first years of operation when it enjoyed a quasi monopoly¸ it registered respectable returns. However¸ one also cannot forget when disaster hit the airline as a consequence of losses generated by the regional hub concept so triumphantly promoted in the early nineties by the politically appointed board. It certainly proved expensive as it accumulated massive losses to dispose of seven Avro Liner Jets and their subsequent leasing to Azzurr Air.

Azzura Air was an Italian airline with an operational base at Milan Malpensa. It operated a fleet of 10 aircraft¸ eight of which were British Aerospace Avro RJ85 and RJ70 units and two Boeings 737-700s. The latter were mainly intended to supplement charter operations while the Avro Liners on loan from Air Malta were principally deployed on the network covered by the franchise agreement with Alitalia. The connection with Air Malta goes back a few years when Air Malta‘s board came up with the novel idea of investing heavily in the purchase of seven Avro Liners¸ ostensibly to turn Air Malta into a regional hub. With great chutzpah¸ the chairman of the time said that the investment would turn the tide and Air Malta will reap untold financial rewards. This advice was also collaborated by professional studies and reports by consultants which the board commissioned as a basis to justify the selection of this particular type of aircraft.